There is a sad beauty in these artworks drawing the tragedy of war.

During WWI, Paris’ magnificent Grand Palais, a Beaux-Arts structure that opened in 1900 as an exhibition hall, was repurposed as a temporary military hospital that served injured French soldiers. It held one thousand beds and had two operating rooms, as well as an extensive physical rehabilitation centre where soldiers could recover from their injuries, exercise and practice military drills before returning to the front.

Spilliaert served briefly in the Belgian civil guard after the German invasion. A pacifist by nature, he was greatly affected by the violence of war. Here, he depicts a deep blue sky illuminated by the flare of rockets, an image witnessed by both soldiers and civilians in occupied territories. The artist concentrated not on the rockets’ violent potential but on the graceful forms they generate and their resemblance to stars and comets.

Many children lost loved ones to the war and were traumatized by the sounds and sights of combat. Ostensibly, celebrating victory, this book, like much wartime propaganda for children, reflects these dark events. Its interior presents images of rebuilding: each page shows a scene of destruction, but when a flap is raised, it shows the same site restored. 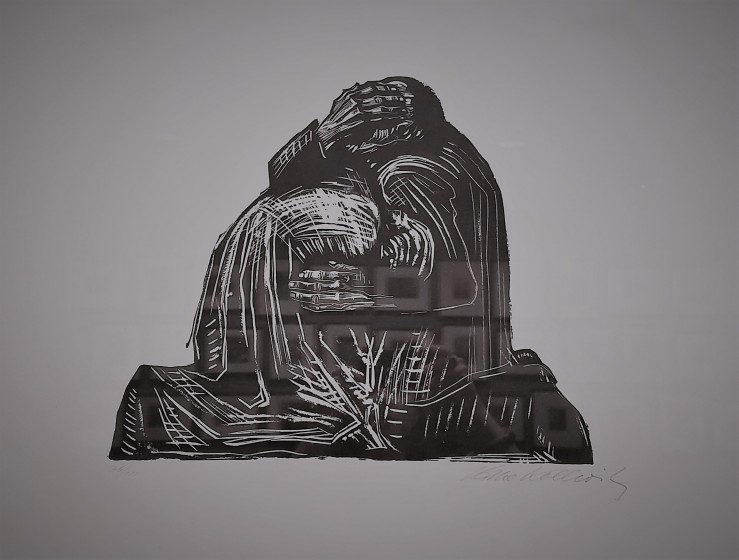 ”Pain,” Kollwitz noted, ”is totally dark.” This raw images portrays the profound grief of parents who, like the artist, lost a child to war. Kollwitz began working in this medium after seeing an exhibition of woodcuts by Ernst Barlach and being inspired by their graphic power; the War series is considered her most important in the technique. Kollwitz spent fifteen years working on a sculpture based on this print. The Grieving Parents, located in the cemetery for German soldiers in western Belgium where her son Peter is buried, is composed of two separate sculptures, showing the parents isolated in their despair. 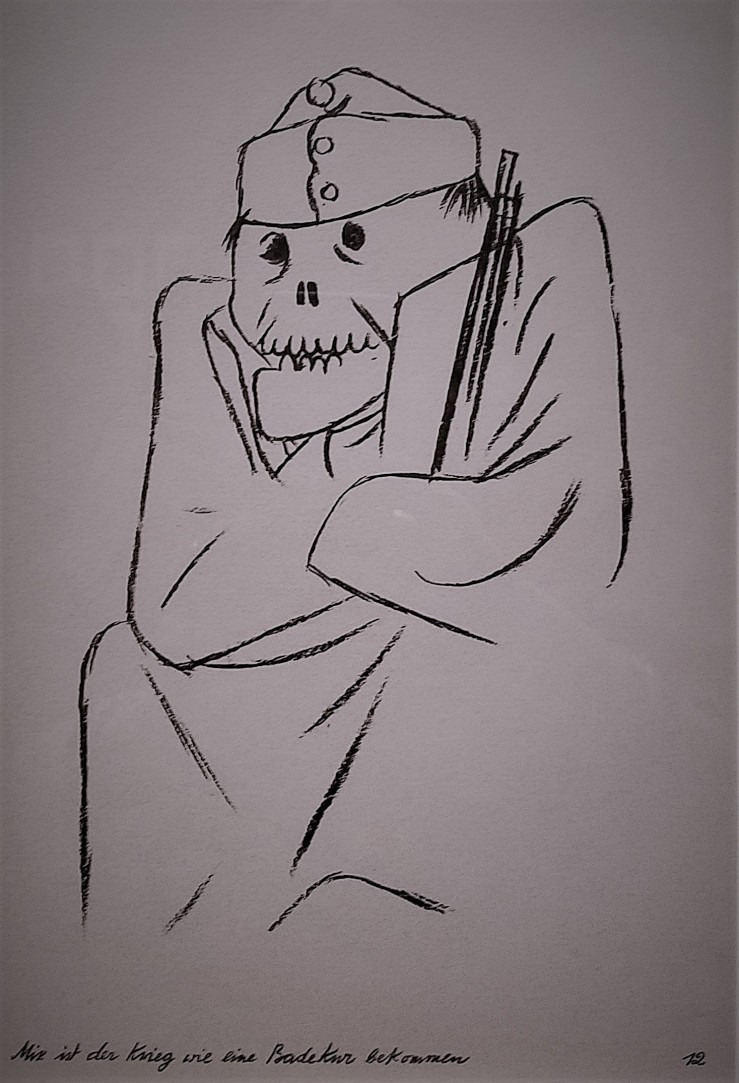 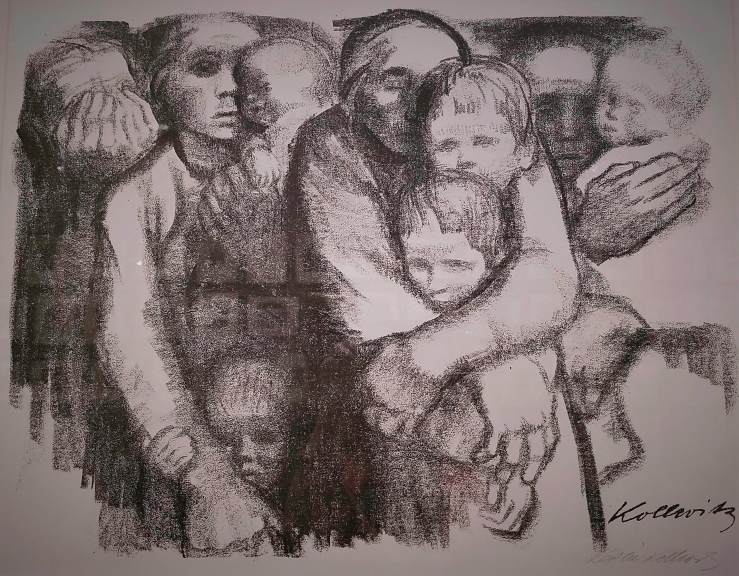 In Mothers, women and children huddle together, their linked bodies forming a solid structure that fills the composition. Kollwitz drew herself in the centre, eyes closed and arms wrapped protectively around her two sons: Hans, the elder, and Peter, who was killed in combat at eighteen.

Images from ”World War I and the Visual Arts”, an exhibition exploring ”the myriad and often contradictory ways in which artists responded to the first modern war”. 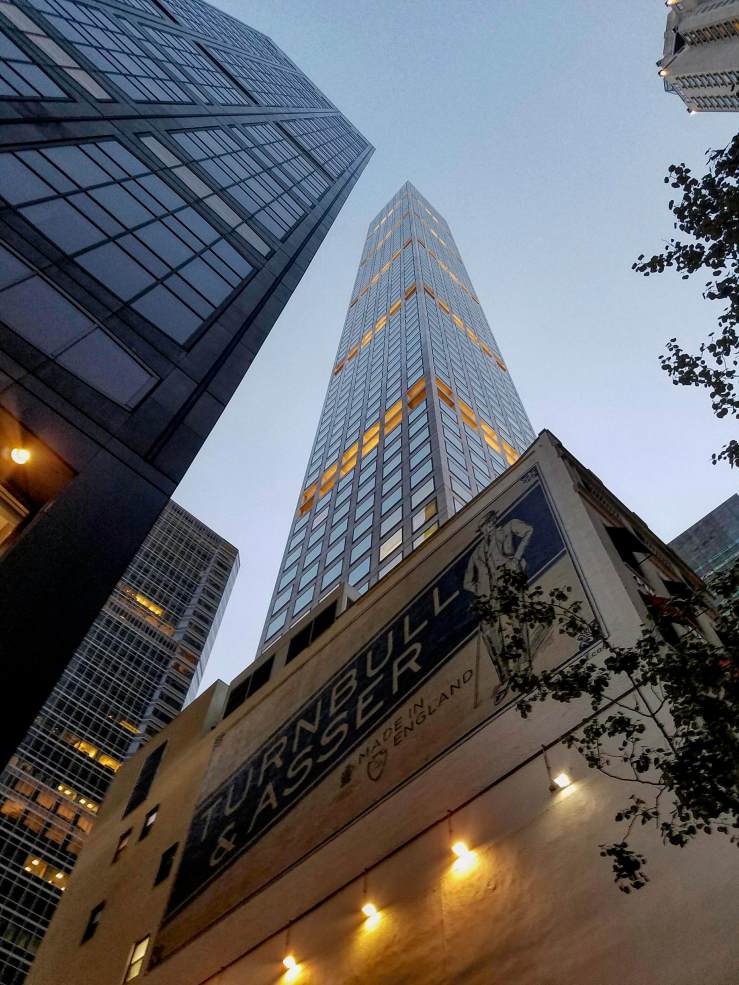 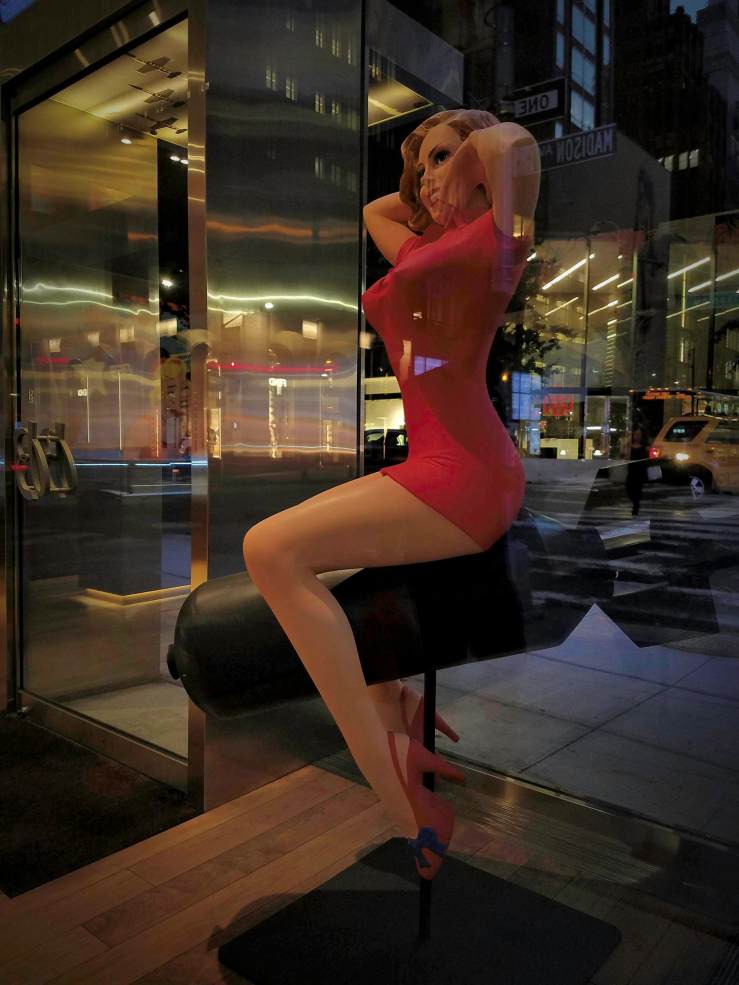 Crossing on foot the Roosevelt Island Bridge doesn’t take long; it is one of the shortest ones – around 2,880 feet or 880 metres only – in the area, connecting Roosevelt Island with Astoria. It is the only way to reach the island by car or on foot (without using the aerial tram or subway) but we only met a couple of vehicles and people. Crossing it proved to be an excellent idea, following the underwhelming experience in Socrates Sculpture Park. The industrial views and welcome quietude of an early afternoon more than made up for it. 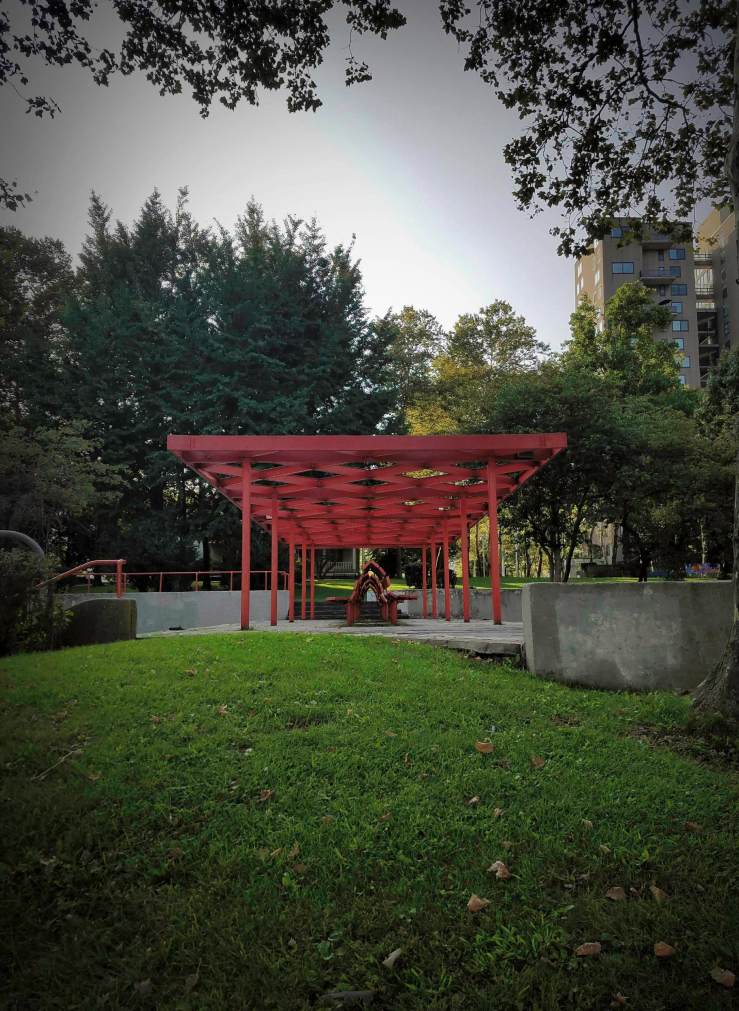 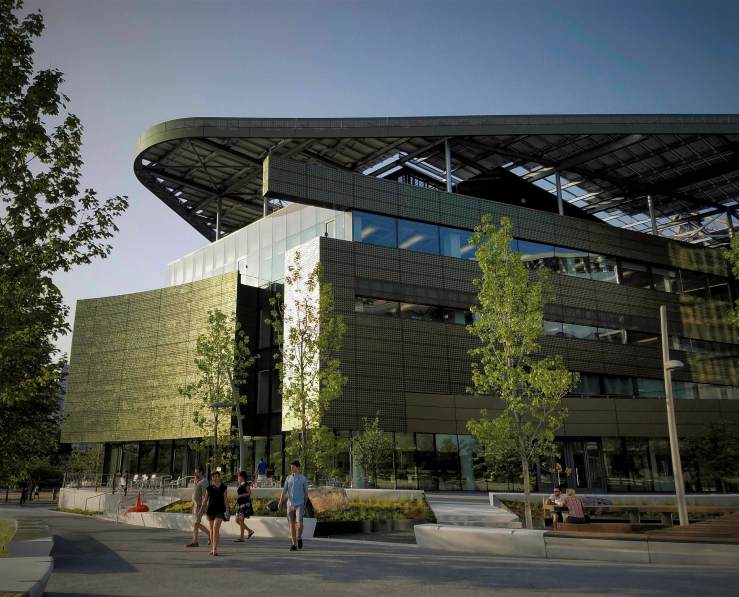 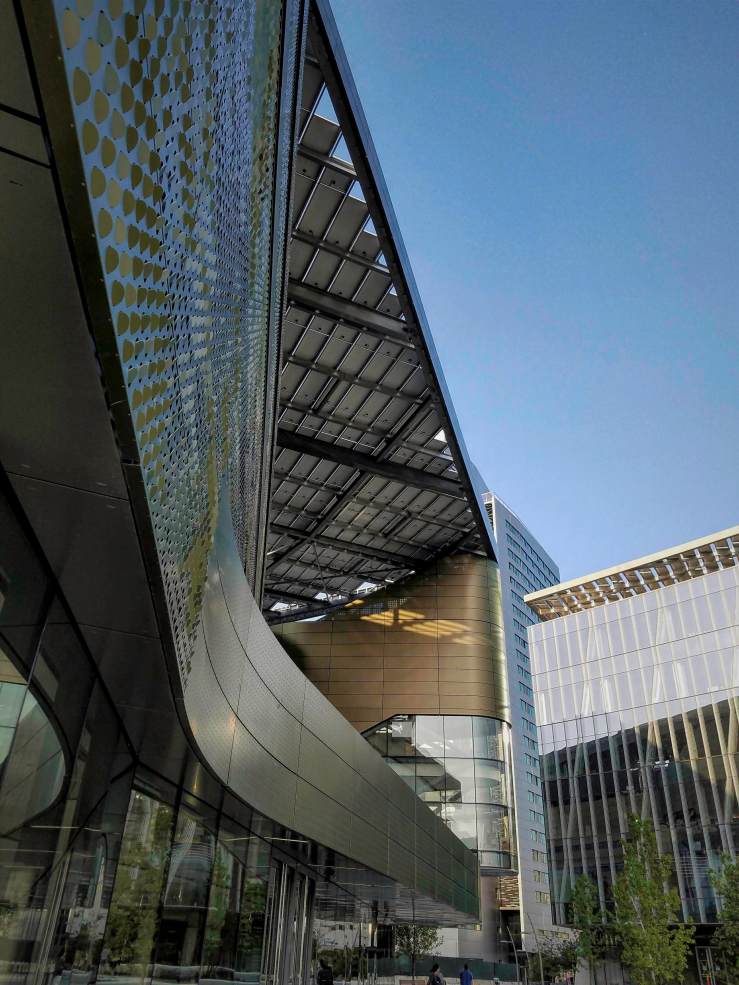 Reading about how the local community took the initiative to save this abandoned space, between Long Island City and Astoria, by converting it into a sculpture park – and being the first to applaud such creative initiatives, I thought I owed it to myself to take a closer look, not least because it is named after Socrates (470-399 B.C.), the great Greek philosopher, which is not surprising considering New York’s largest Greek community is in Astoria.

The exhibition on view those days was Nari Ward: G.O.A.T., again, G.O.A.T. being an acronym for Greatest of All Time, a phrase commonly used in American sports. The exhibition examined ‘‘how hubris creates misplaced expectations in American cultural politics. This exhibition also brought new insight into the artist’s exploration of identity, social progress, the urban environment, and group belonging.”

While it was difficult for me to grasp the higher meaning behind the flock of goats carrying stuff on their backs, I found the artist’s explanation ”… articulation of social dynamics, conjuring the animal’s attributes and symbolic connotations, from an ambitious climber of great heights to an outcast” equally puzzling.

On the other hand, the Apollo/Poll sign, that read ‘APOLLO’, the letters ‘A’ and ‘O’ blinking on and off to spell out “POLL” was easier to interpret even without the help of the artist (but here it is anyway): ”… The size and font of the red LED-lit letters are inspired by those of the iconic neon beacon hanging over Harlem’s Apollo Theater, a renowned venue for African American entertainers. The word ‘POLL’ suggests not only the theater’s well-known amateur night in which the audience decides the winner, but also the democratic election process.”

I wonder what would Socrates have made out of all this…

Sharing a pastrami at Katz’s proved to be not only a delight but also necessary. We didn’t know it yet but we would need all the energy we could muster to see us through the rest of the evening. You see, we were about to embark on a journey to the fantasy world of the McKittrick Hotel and Punchdrunk’s adventurous production Sleep No More where lines between reality and dream, performer and spectator, time and space, are blurred and constantly shifting.

Sleep No More tells Shakespeare’s classic tragedy Macbeth seen as a film noir but, instead of watching a film, spectators move freely through corridors and rooms following any of the performers they choose to, or no one at all. People, wearing white masks handed by the McKittrick’s eccentric hosts before bidding them farewell with a firm ”fortune favours the bold”, can enter the dimly lit rooms, touch objects, open drawers, listen to soft rustling sounds and whispers, even breath the ever-so-faint scent of unseen residents. Sometimes, they can come face-to-face with an actor, perhaps too close for comfort. Which is precisely the whole point of this production, a unique theatrical experience unlike any other.

For tips on how to experience Sleep No More best, please check here.

Image credits: all except the first one, which was taken while waiting in line outside, are courtesy of the McKittrick and Punchdrunk. Photography is strictly forbidden so as not to spoil the ambience.

Before going to Katz’s make sure you work up a very healthy appetite. That’s what all that flânerie, walking from Hell’s Kitchen down to the East Village,  helped us do and even then we had to share a pastrami sandwich. For Katz’s Delicatessen is renowned not only for their legendary pastrami but also for their sandwiches of gargantuan proportions (ok, and for that orgasm scene in When Harry Met Sally which, having tasted said pastrami, it totally makes sense). 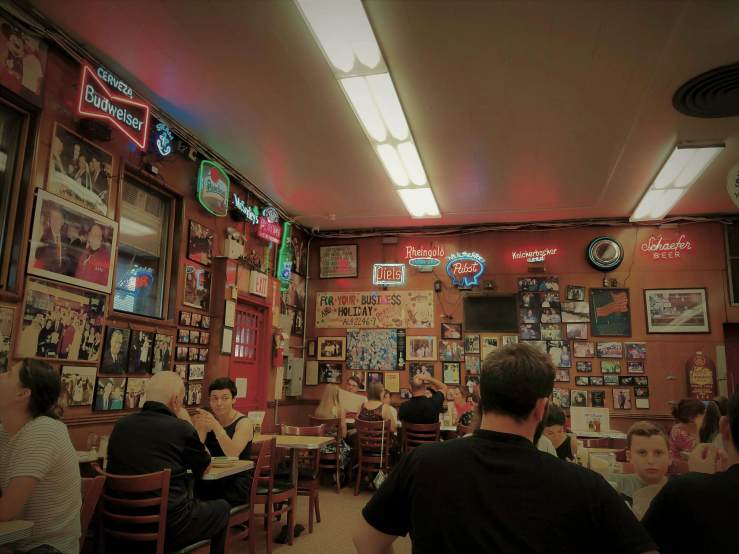 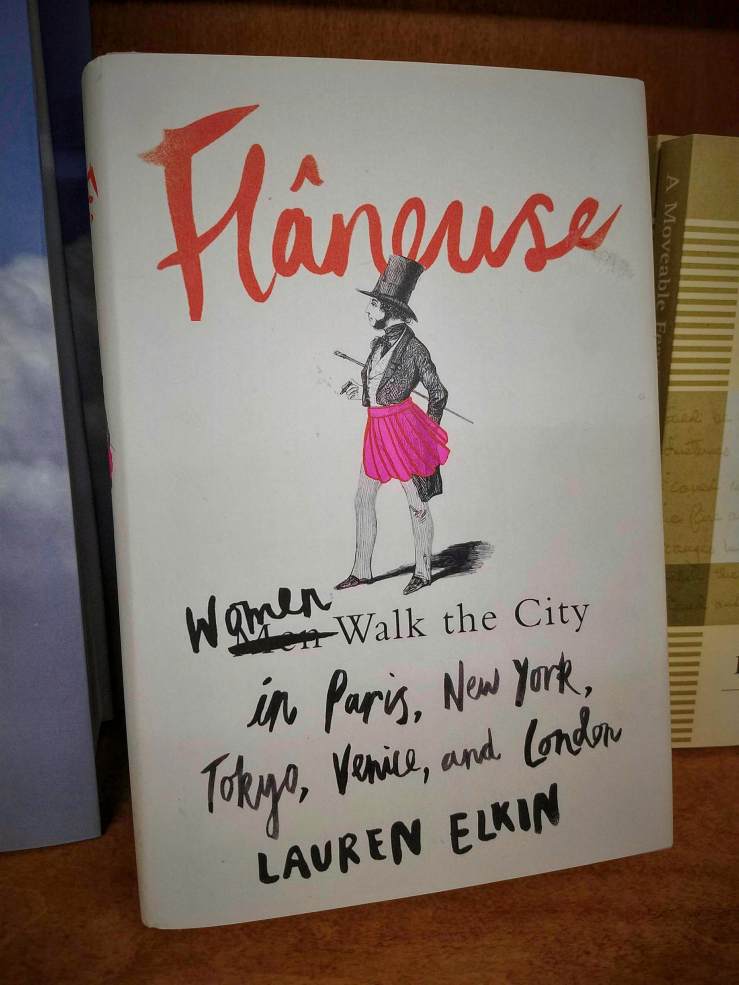 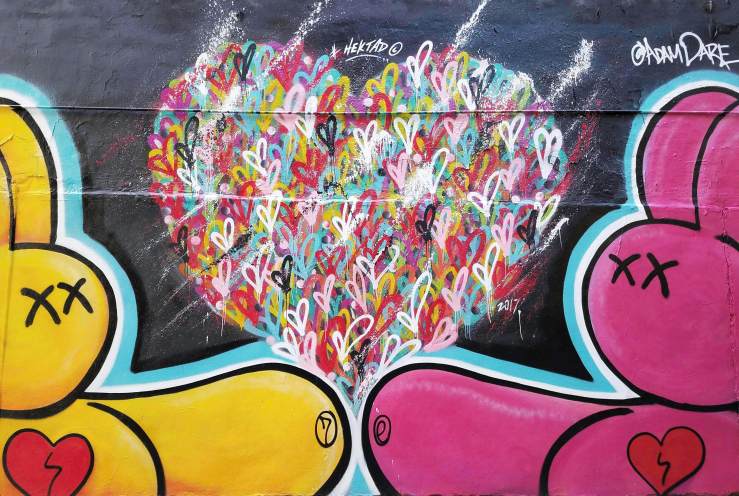 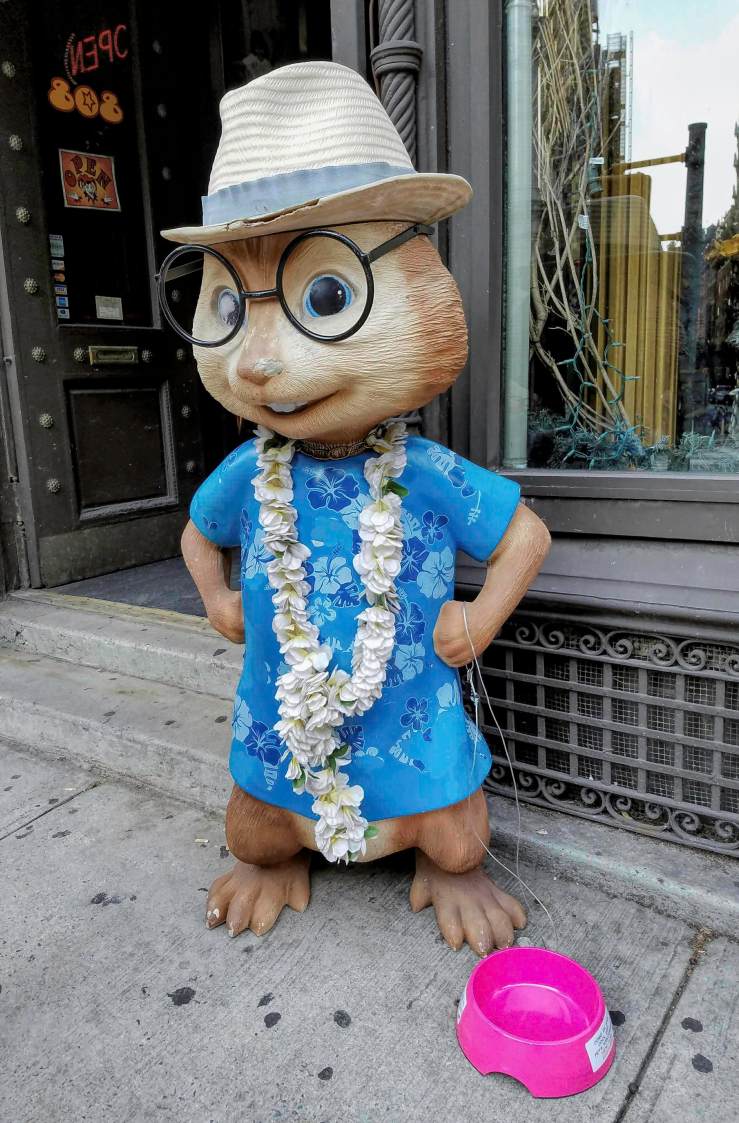 Street art around Bowery, a real building that could also be the subject of a photorealistic painting in Cooper Square, book shopping in the Strand and window shopping on Broadway. 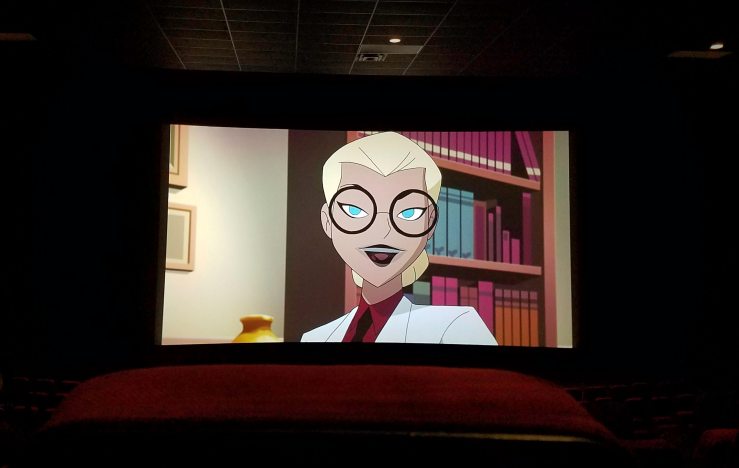 In five scratchboard illustrations and one gouache.

In his 35-year career, Virgil Finlay produced over 2,600 illustrations, a remarkable achievement considering his labor-intensive and time-consuming drawing style.

”Instead of the typical pen and ink or carbon pencil drawings produced by most pulp illustrators, Finlay used a unique technique combining scratchboard—in which a clay-covered board is coated with black ink and the artist scratches away white lines from the black using a sharp blade—with intricate pen cross-hatching and an astonishingly painstaking method of creating tones called stipple.

Contrasted with hatching, or crossed lines, stippling is a time-consuming process in which tones are created with hundreds of tiny individual dots, carefully placed and dripped off the end of an ultra-fine dip pen, one dot at time.” [source]

Face in the Abyss
Gouache on illustration board
Appeared on the cover of Famous Fantastic Mysteries magazine for ”Face in the Abyss” by A. Merritt, Frank A. Munsey Co., October 1940

”He came out of his coma. We left a sketch pad and pencils by the bed. He did a drawing, he went back into the coma, and died.”– Lail Finlay, Virgil Finlay’s daughter 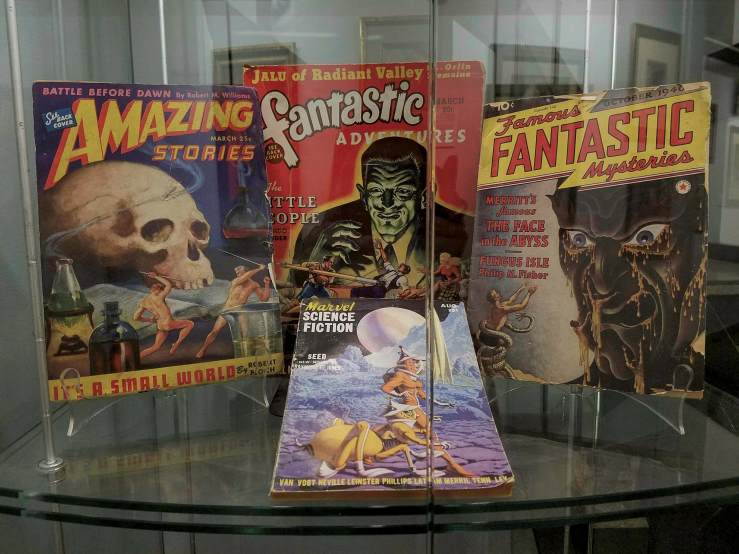 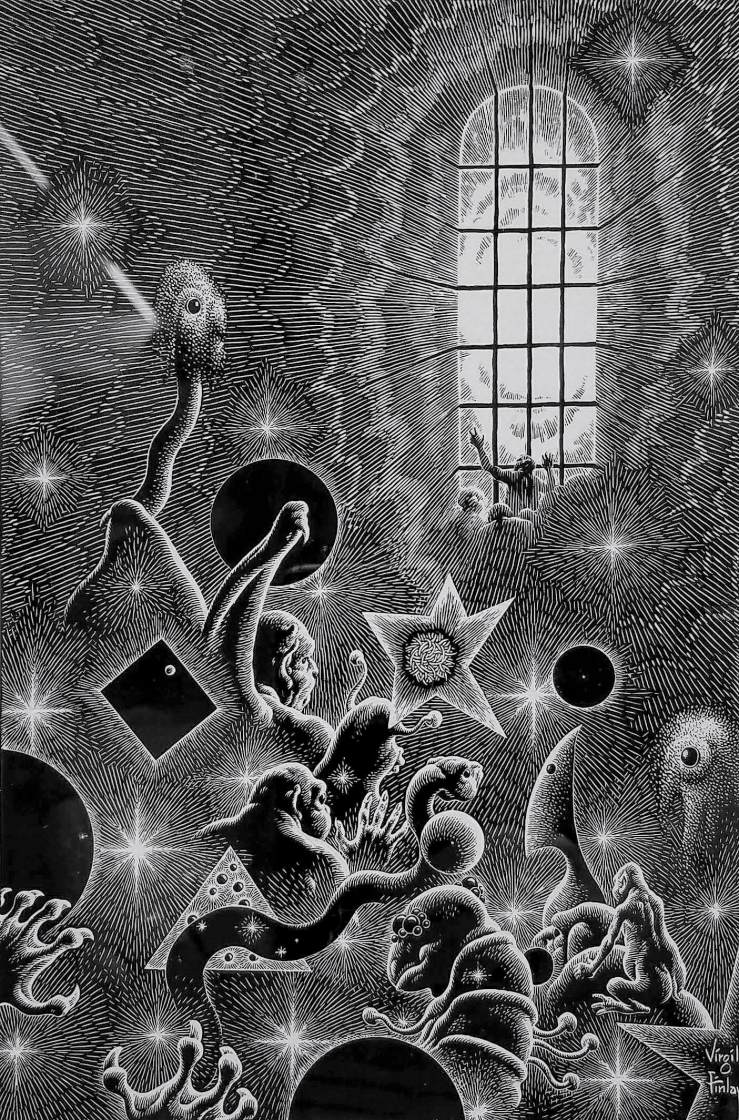 For the first time in science fiction history an Earth man and an alien woman have a sexual love affair in Philip José Farmer’s ”The Lovers”. This was quite groundbreaking yet controversial in 1950s American pop culture; however, it would seem quite tame compared to today’s science fiction books and films.

From ”Conquest of the Moon Pool”:
”… and suddenly there before us stood two figures! One was a girl – a girl whose eyes were golden… whose softly curved lips were red as the royal coral and whose golden-brown hair reached to her knees! And the second was a gigantic frog – a woman frog… six feet high if an inch and with one webbed paw of its short, powerfully muscled forelegs resting upon the white should of the golden-eyed girl!”

”Dwellers in the Mirage” introduction:
”The strangest adventure any man had encountered since time began faced Leif Langdon when he tumbled through that Alaskan mirage into a lost world.”

Adenturer Leif Langdon stumbles upon an uncommonly warm, hidden Arctic valley where he finds and falls in love with Evalie. Also in this valley are the Little People – elfin warriors fighting against Lur the Witch Woman and her demon riders who raid the Little People’s land for sacrifices to Kraken, their dark lord. Tapping into buried memories of another lifetime, Langdon realizes he had a past life as Kraken and as Lur’s lover. So begins Langdon’s inner struggle between his two selves.

All artwork by Virgil Finlay (1914 – 1971), photographed at the Society of Illustrators 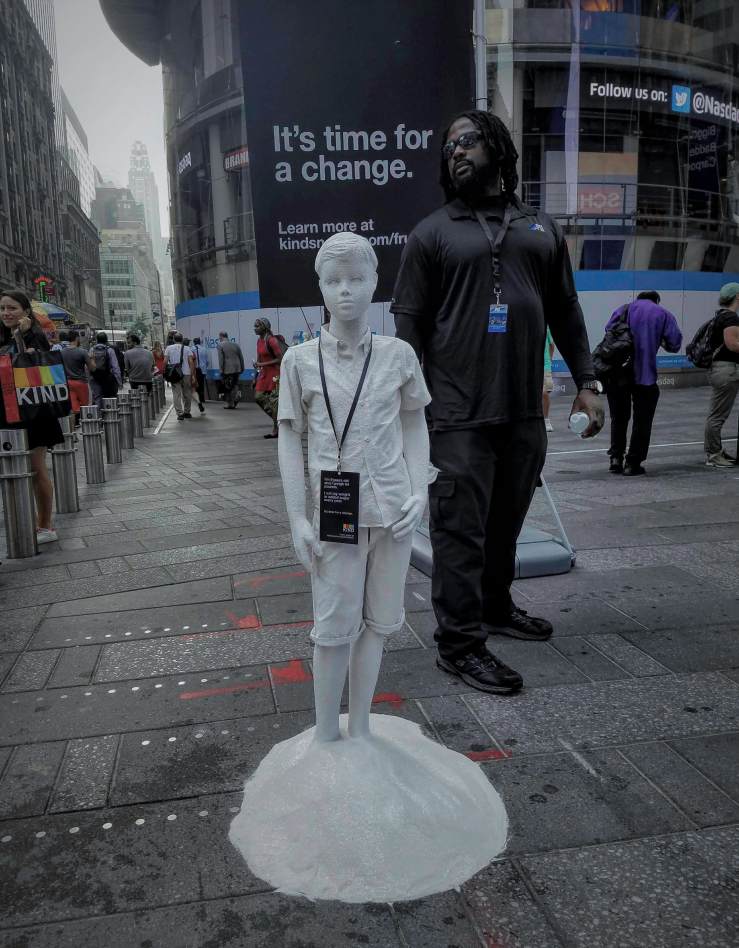 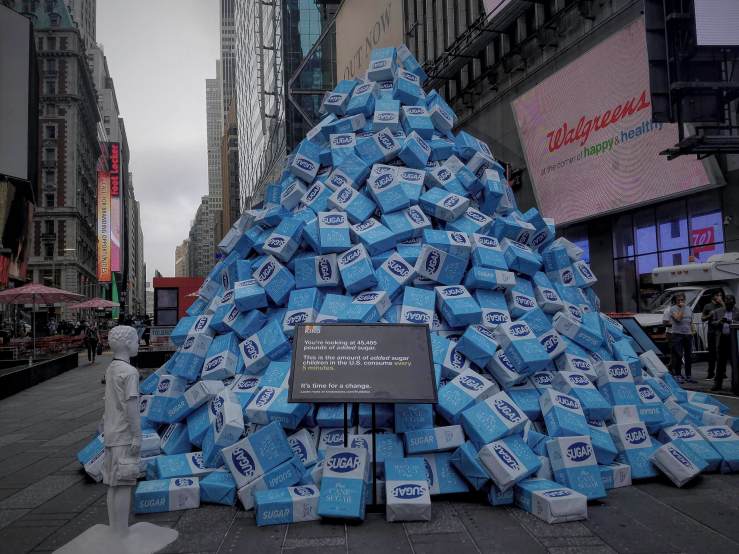 In case not very clear, the sign says: You are looking at 45,485 pounds of added sugar. This is the amount of added sugar children in the U.S. consume every 5 minutes.

But adults, too, are avid sugar consumers. Worst of all, we have little or no choice. After more than two years in the U.S. I still find it next to impossible to buy basic foods such as bread or cereal that do not contain some type of added sugar. Even foods labeled as ”healthy” contain cane sugar or maple syrup; sometimes sugar is disguised as cane syrup, which is nothing else than cane juice boiled down to a syrup, i.e. sugar.

By the way, the snack bars from the company responsible for this campaign? They contain 5g of added sugar.