These Tiffany artifacts don’t necessarily involve breakfast. Equally brilliant, precious and a tad more colourful, they are at their best and brightest at dinner. They are also part of the New-York Historical Society’s permanent collection and light up an entire – recently renovated – floor. 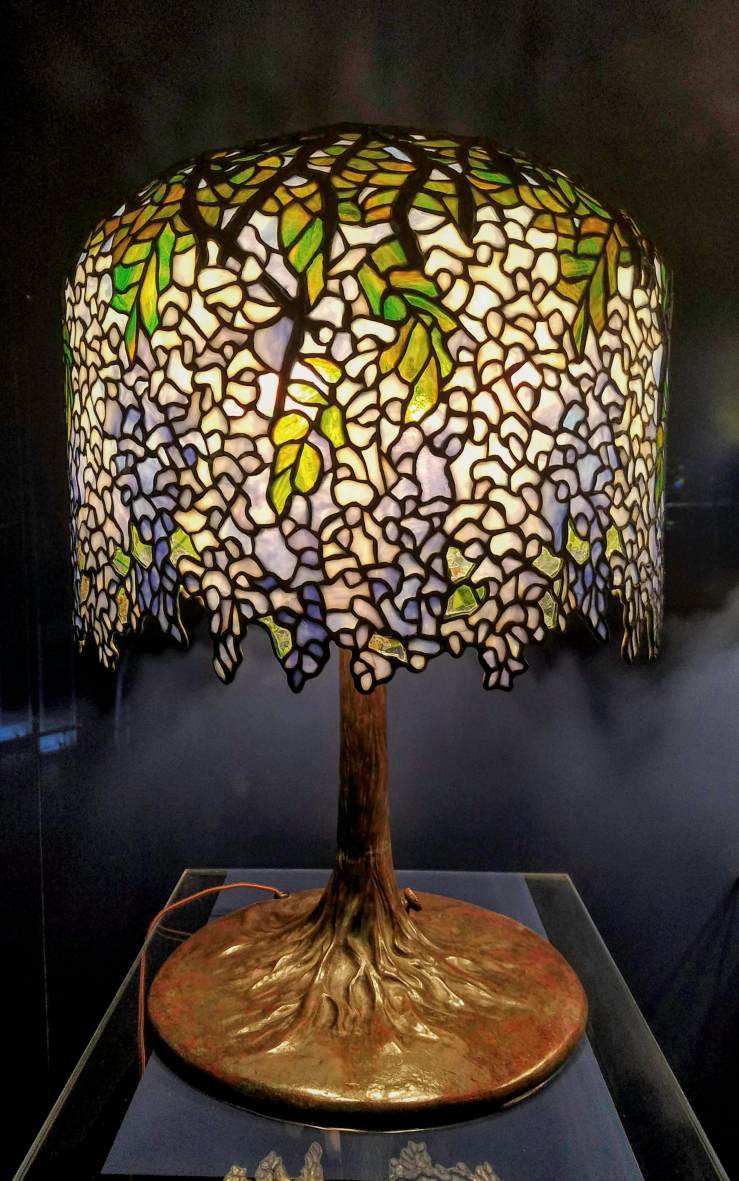 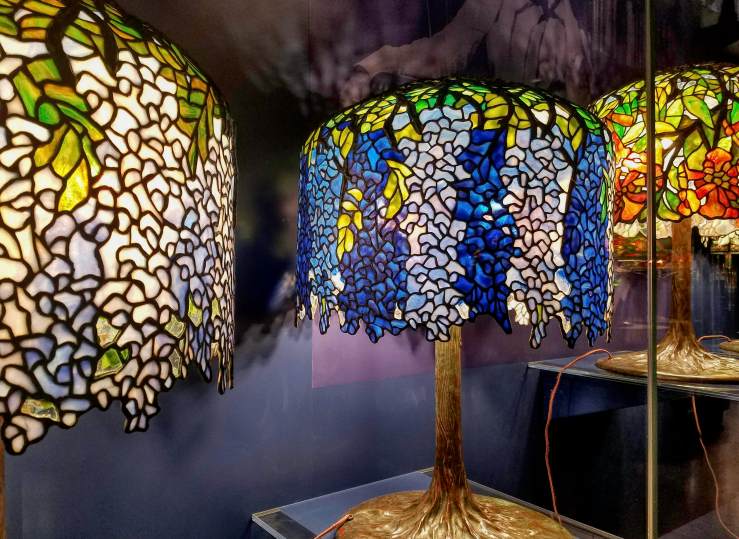 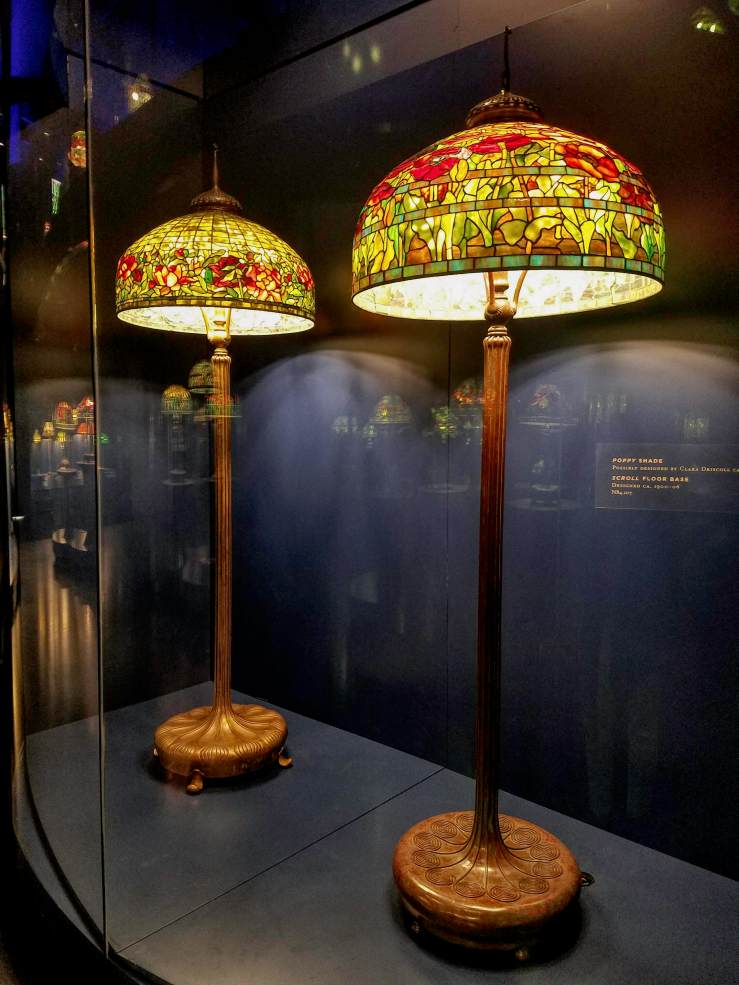 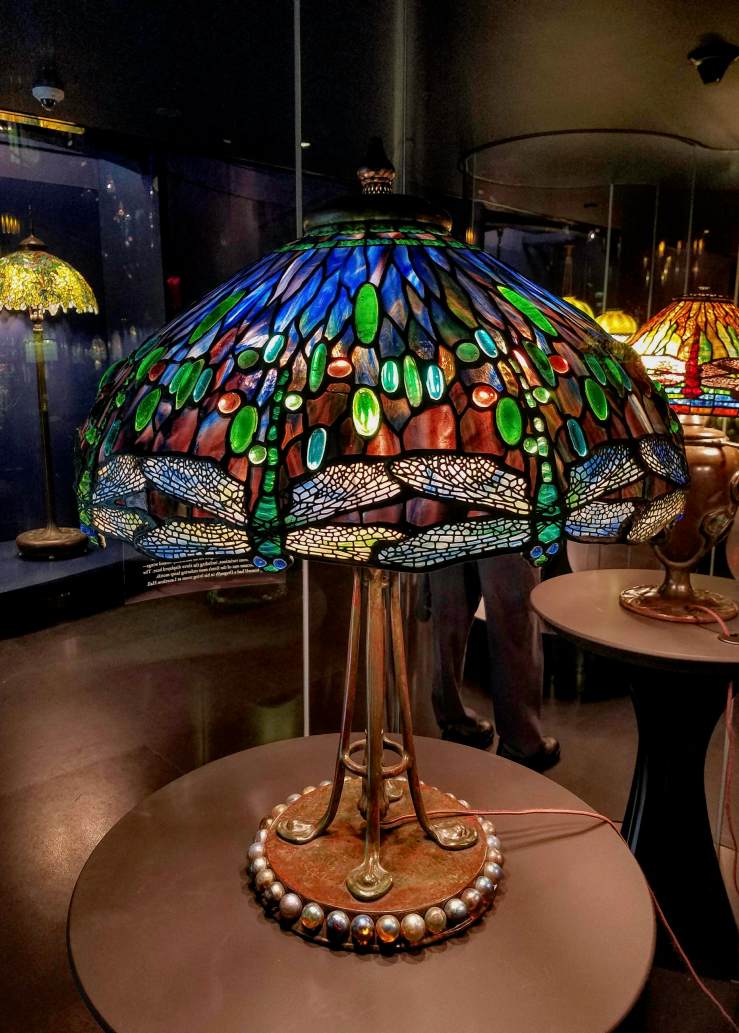 The New-York Historical Society’s extensive collection of Tiffany Studios lamps was the gift of pioneering collector Dr. Egon Neustadt (1898-1984), an Austrian immigrant an orthodontist. Along with his wife, Hildegard Steininger (1911-1961), Neustadt began buying Tiffany lamps at a time when Americans scorned them as passé. Shortly after their marriage in 1935, the couple, looking for affordable furnishings for their Queens home, found a ”strange, old-fashioned” Daffodil lamp in  Greenwich Village antique shop and purchased it for $12.50. That modest discovery sparked a decades-long quest in which the Neustadts amassed more than 200 Tiffany lamps, perhaps the largest and most encyclopedic collection in the world. 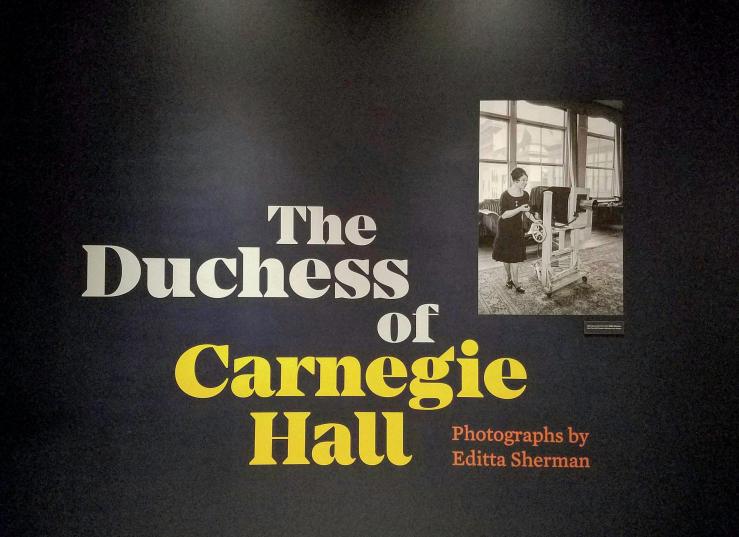 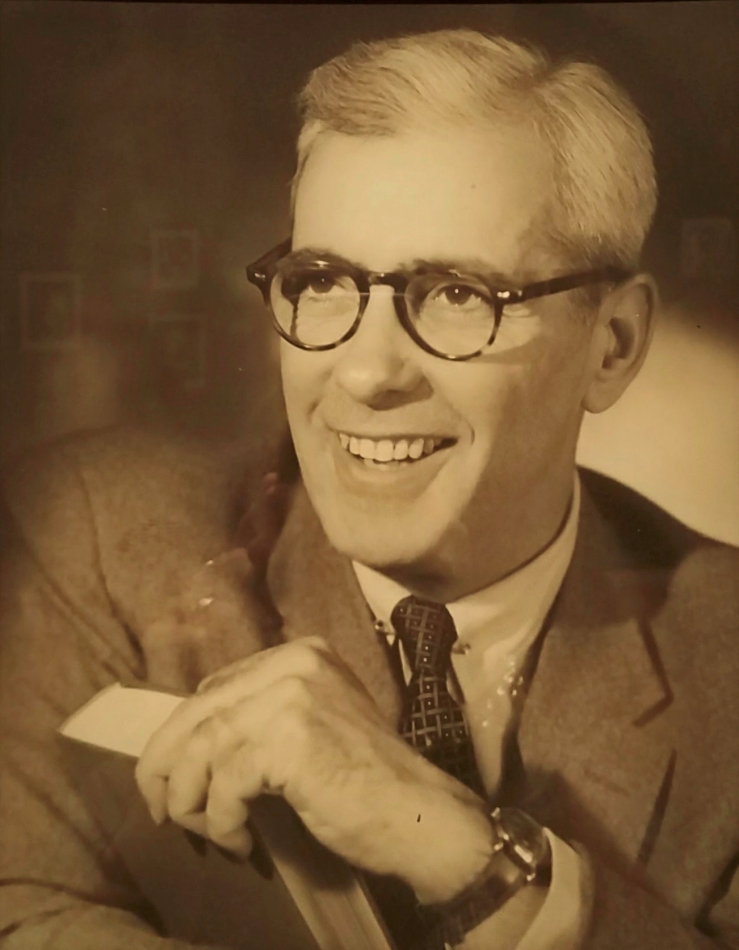 Montagu was a humanist and anthropologist who studied human character and issues of race and gender. Among matters he addressed were the meaning of race as a defining term and what he saw as the superiority of women over men. About death, he famously said that ”the idea is to die young as late as possible.” 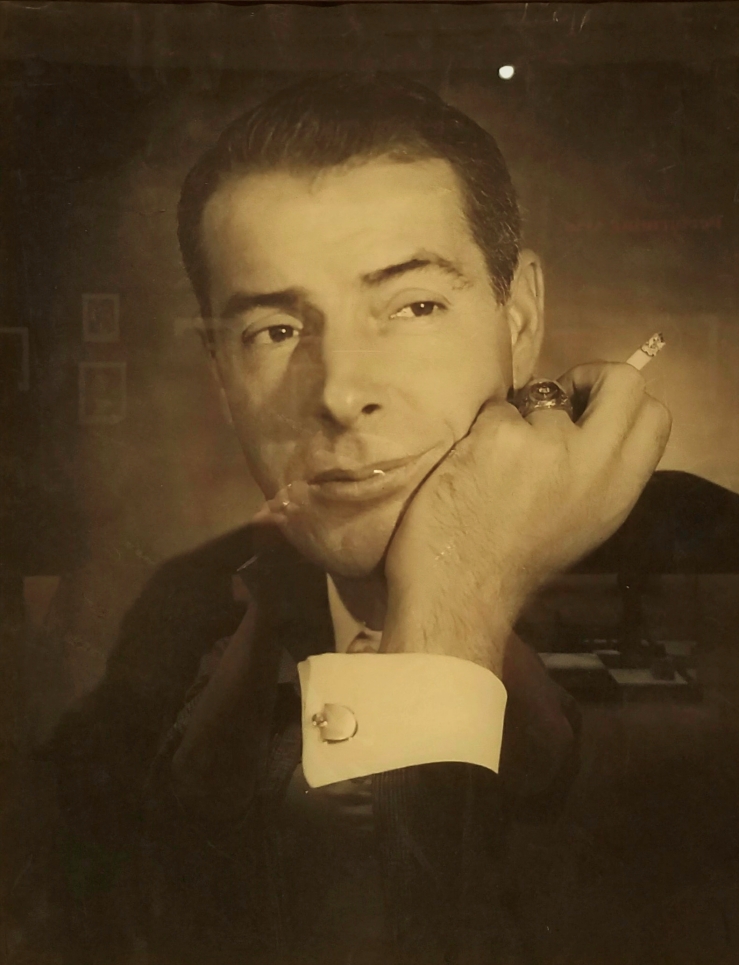 Joe DiMaggio, also known as ”The Yankee Clipper”, played baseball for the New York Yankees from 1936 until 1951 (with a four year gap between 1943 and 1947 when he served in the military). He led the Yankees to nine world championships. 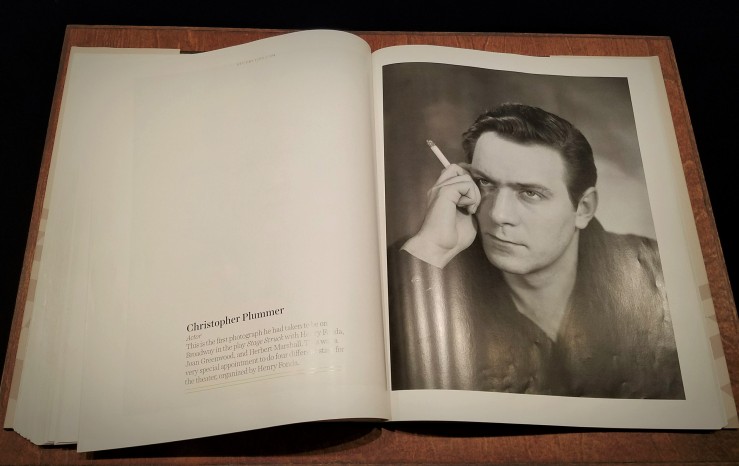 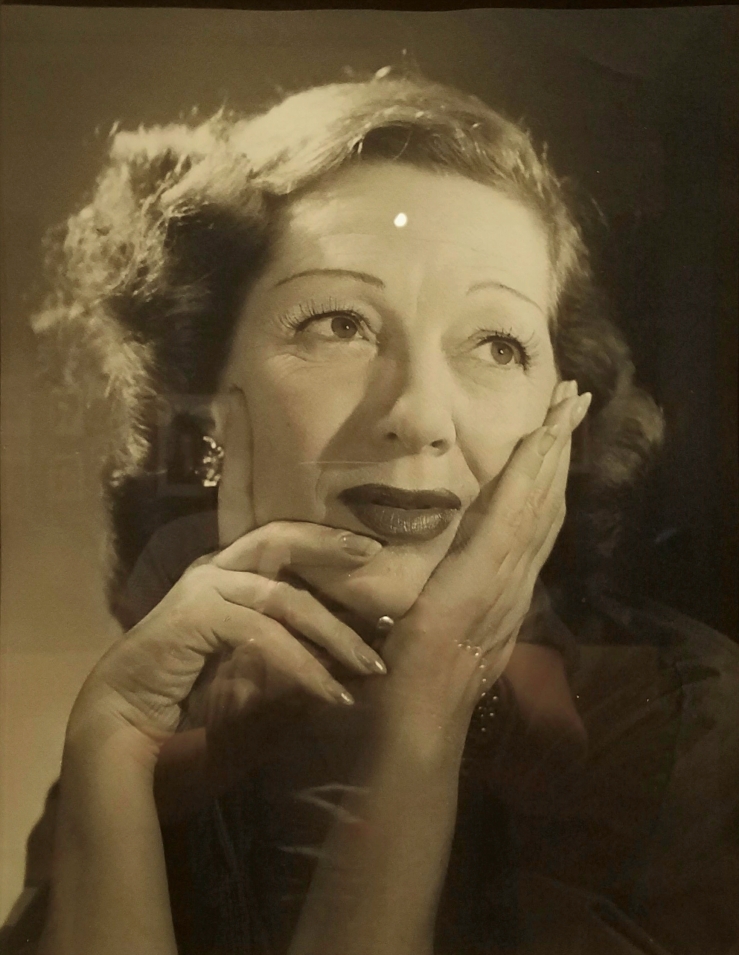 British actor Gertrude Lawrence played Anna in the first production of The King and I, a role created expressly for her. This was not the first time – Noël Coward, a longtime friend, wrote the play Private Lives (1931) specifically for her. 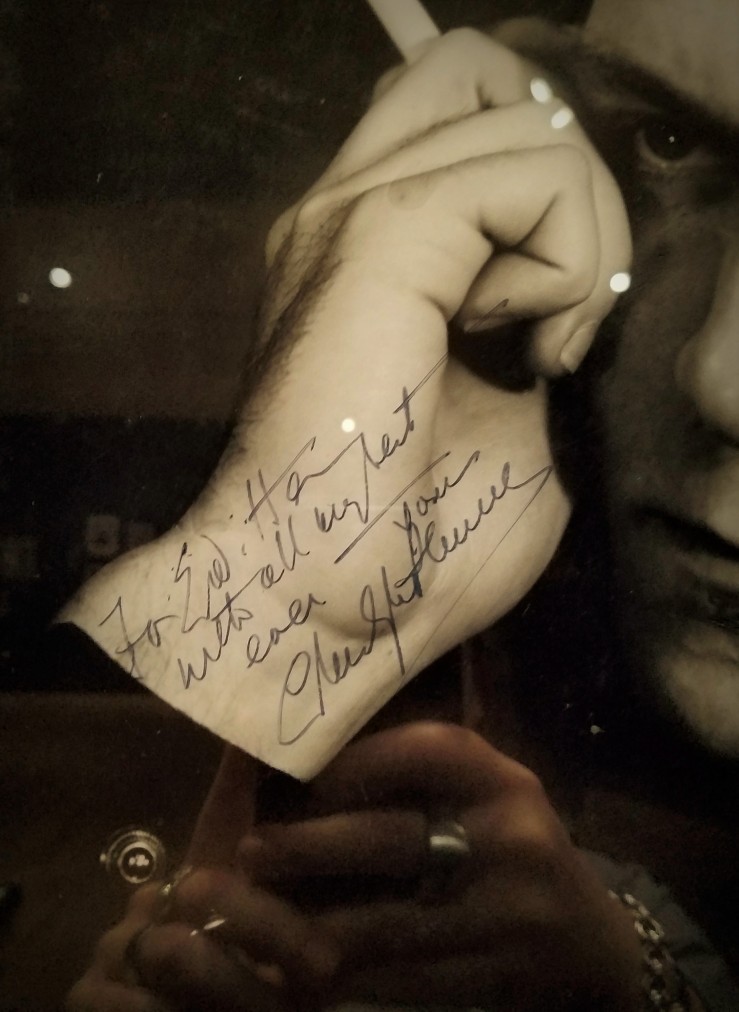 Lillian Gish first appeared on the stage when she was just six years old. She met director D. W. Griffith in 1912 and made over twenty-five silent films with him in the next few years. Gish turned to the stage when ”talkies” took over Hollywood in the 1920s but became involved with film again in the 1940s,

Julie Newmar grew up in Los Angeles and came to New York City in 1955 to pursue a career on Broadway. Eventually she would also turn to movies and television and was cast as Catwoman in the Batman television series which premiered in 1966.

Oscar winner Tilda Swinton has been acting since she was a student at Cambridge University. Among her credits are the Curious Case of Benjamin Button (2006), The Grand Budapest Hotel (2014) and Trainwreck (2014).

The feather ”shawl” was originally a trim at the bottom edge of this dress. Sherman had it cut off and used it as a shawl.

Portraitist Editta Sherman (1912-2013) was ”the duchess of Carnegie Hall” – a moniker, by some accounts, dreamed up by fellow-photographer Bill Cunningham, her longtime friend and neighbour at the Carnegie Hall Studios. ”A seasoned human being and a seasoned performer” in the words of the New York Times, she had a career that spanned over a half-century and a larger-than-life persona that also transcended the ages.

Born in Philadelphia in 1912 to Italian immigrants, she learned her trade from her father, also a portrait photographer. She turned  professional in the 1940s to help support her family after her husband Harold fell ill. He ventured out seeking sitters, first on Martha’s Vineyard where they opened their first photography studio and then in New York City. Although constantly worried about food and lodging, they were able to hold it together, raising five children, until the early 1950s when they found a healthier environment for the children outside the city. Their hopes were to reunite the family when finances permitted. Harold died in 1954 and, relying on his contacts while tirelessly drumming up new business, Sherman once remarked, ”the general feeling at that time was that women were amateurs, no matter how well-known you were.” She thus tried to look order ”and very professional.”. Editta Sherman lived and performed feminism. Although she faced a constant struggle, eventually her reputation as a premier portrait photographer grew and, with it, her business.

Sherman loved being in front of the camera as much as behind it. Her free spirit dominated the photographs of Bill Cunningham’s eight-year project ”Façades”, a series that depicted Sherman in period costume juxtaposed against New York City’s architectural masterpieces.

You can read more about Façades on one of my earlier posts on ”Lia in Brussels”. 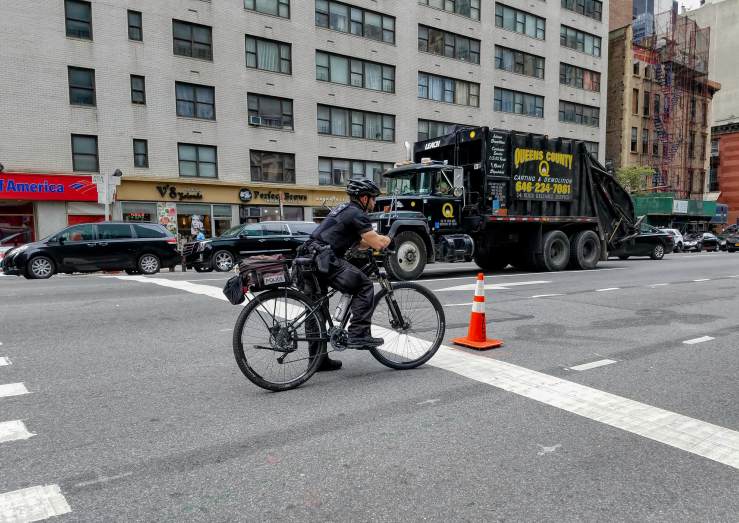 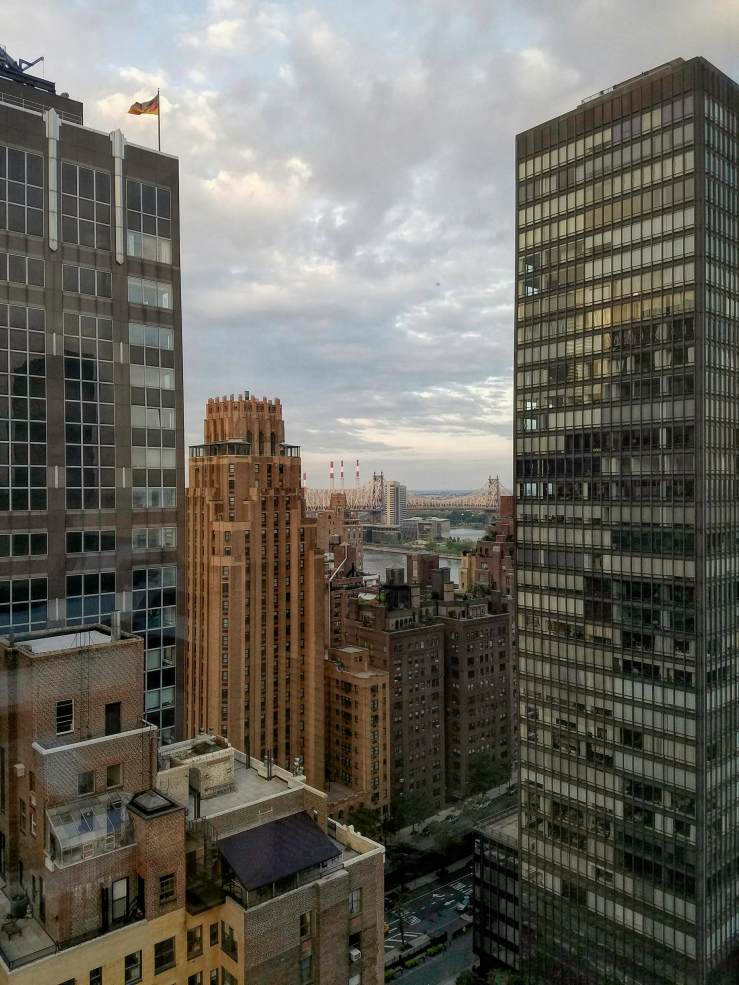 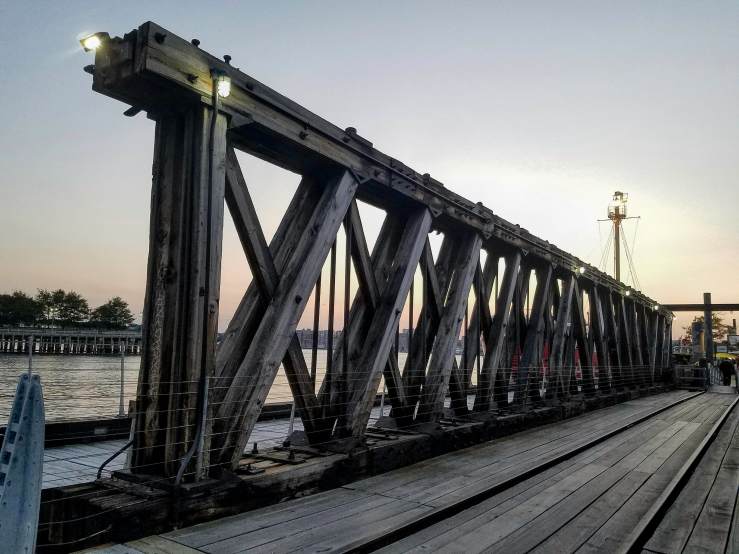 You are not alone, Sara. 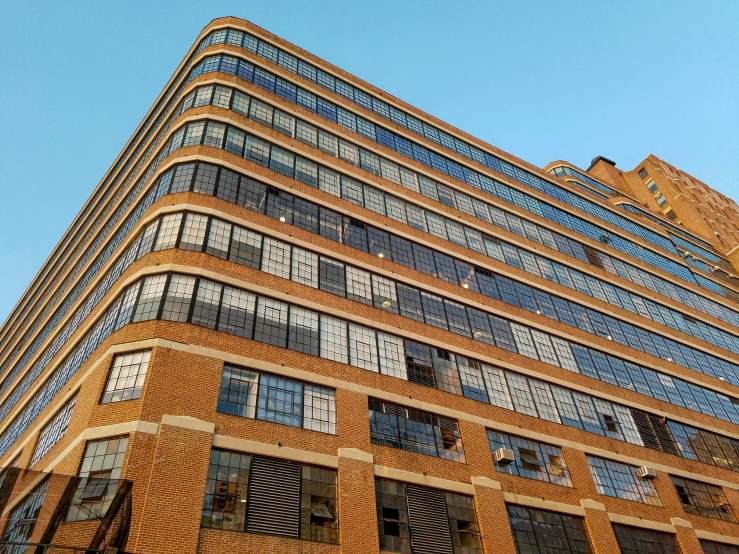 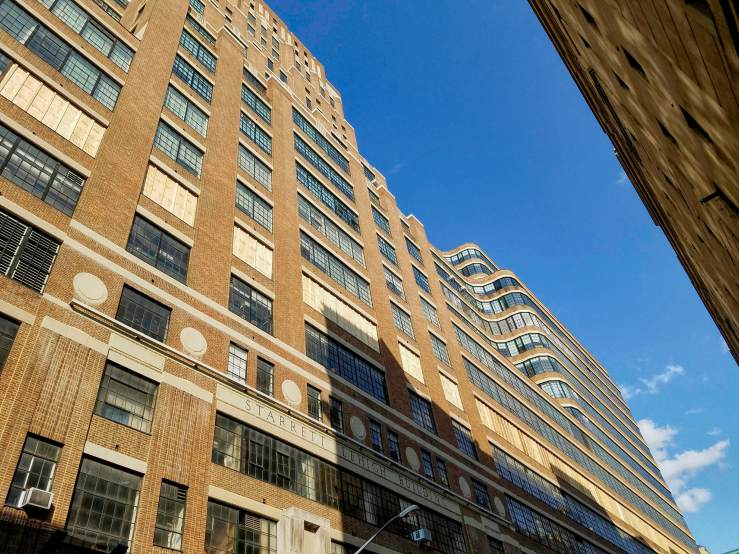 a wildly extravagant, lavishly adorned cabinet of curiosities, bursting with antique and vintage objects collected from all over the world. That marble fireplace? French, 1840s, acquired on Bond St. from Bonhams and Phillips Auctioneers. That Whiskey Bar? Expands around a Player Piano of 1819 and holds over 300 varieties of whiskey. Stained glass from Milan, wallpaper made in Mexico, original wood paneling from Hope Castle in Ireland. See that antique clock on the Irish Writer’s Wall? It’s only one of 26, all set to 1:50, the time of Oscar Wilde’s death.

The cocktails? Sinfully delicious. How poetic that, in an ironic twist of fate, New York City’s ”longest bar” extends on the ground floor of the building that once was the Prohibition Enforcement Headquarters! Mr. Wilde himself, the very embodiment of aestheticism, hedonism, eccentricity and sophisticated debauchery, would have approved. 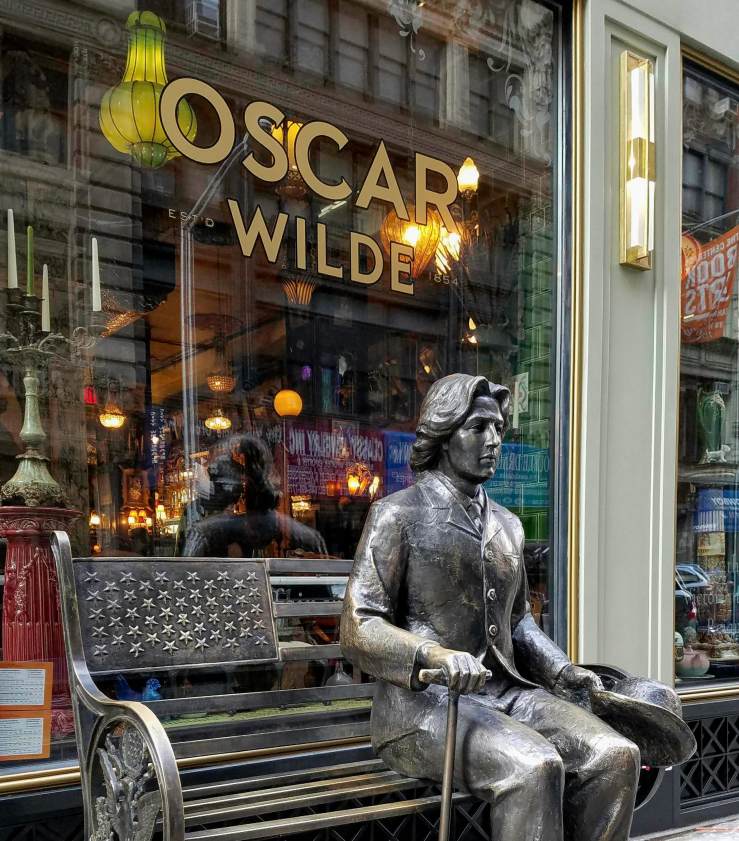 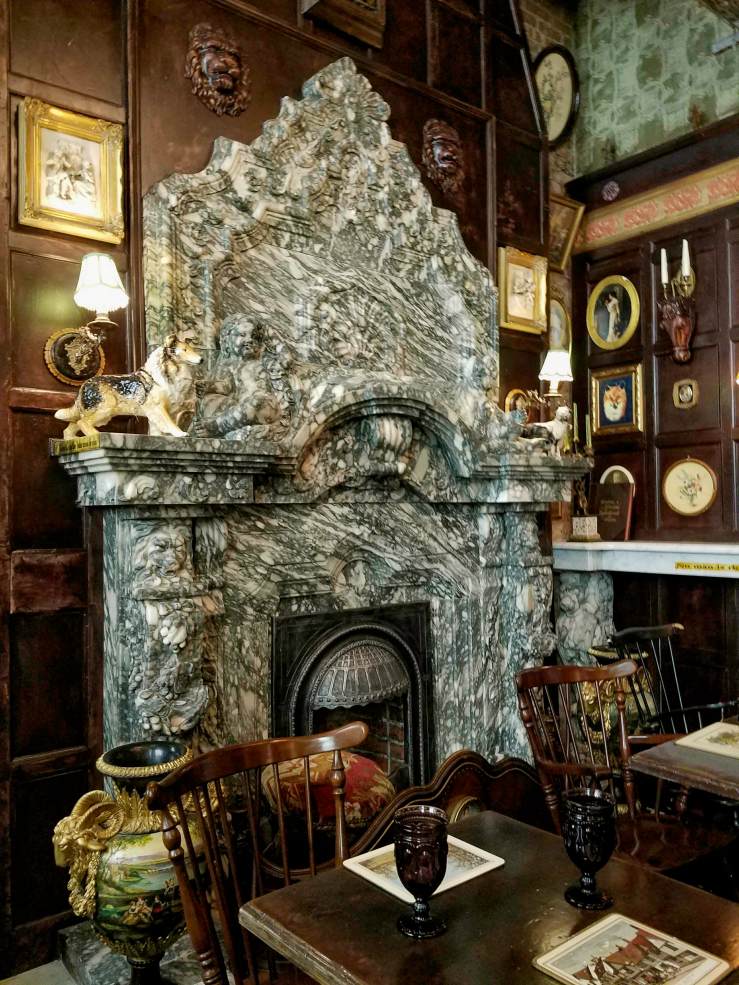 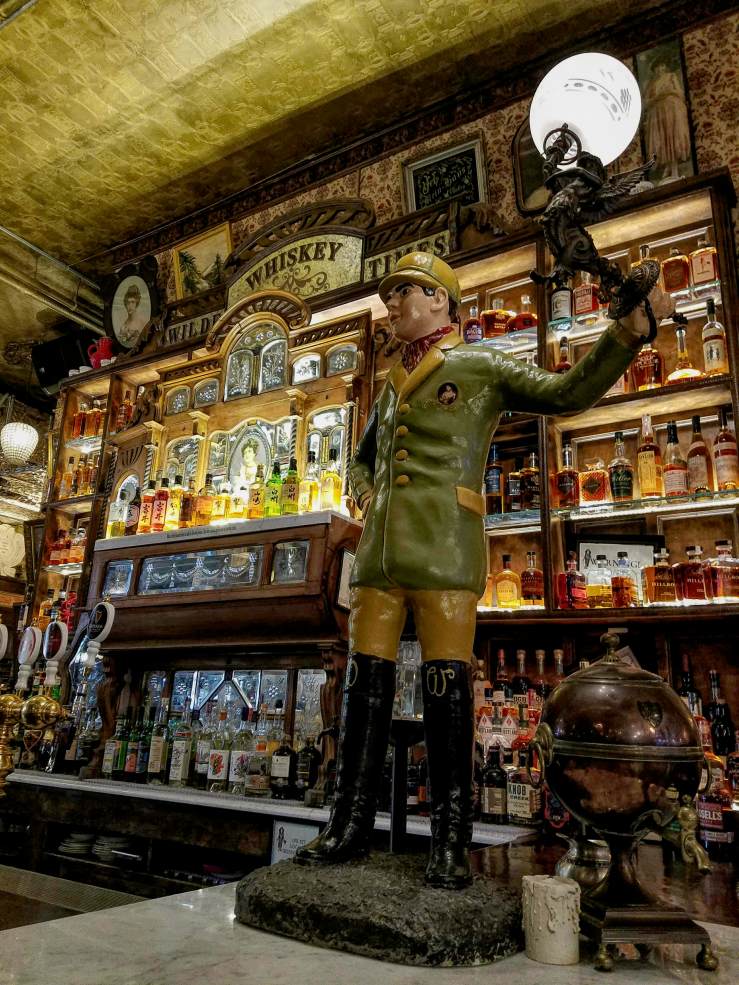 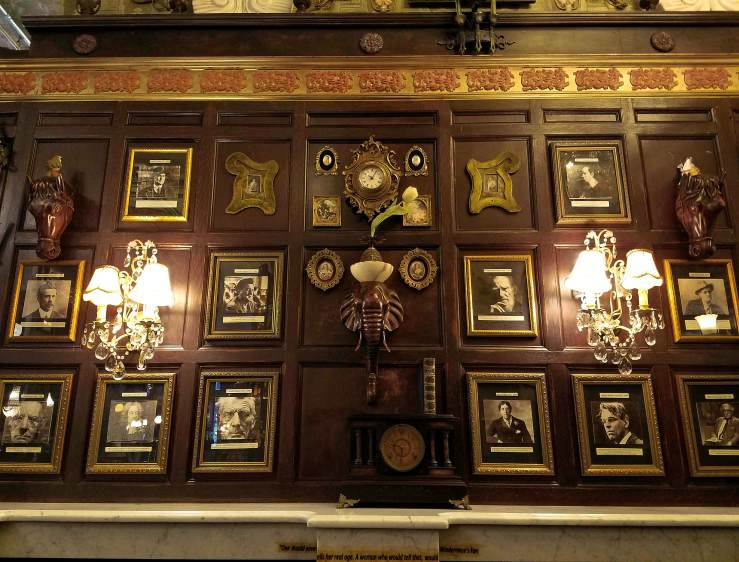 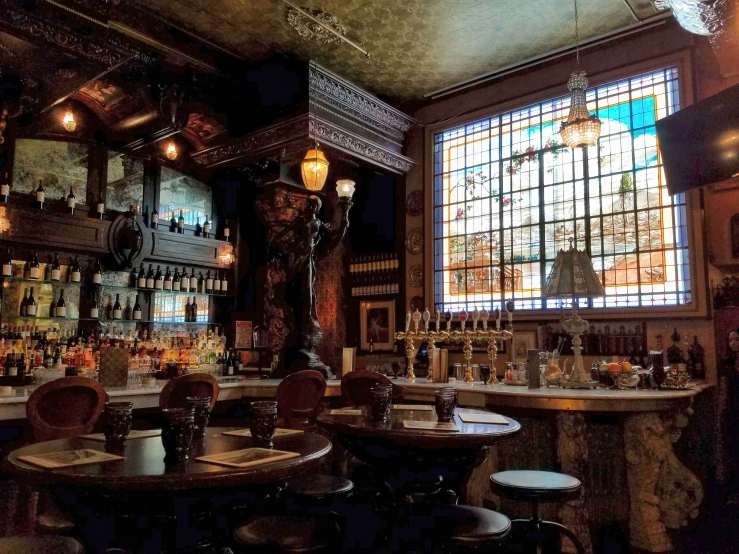 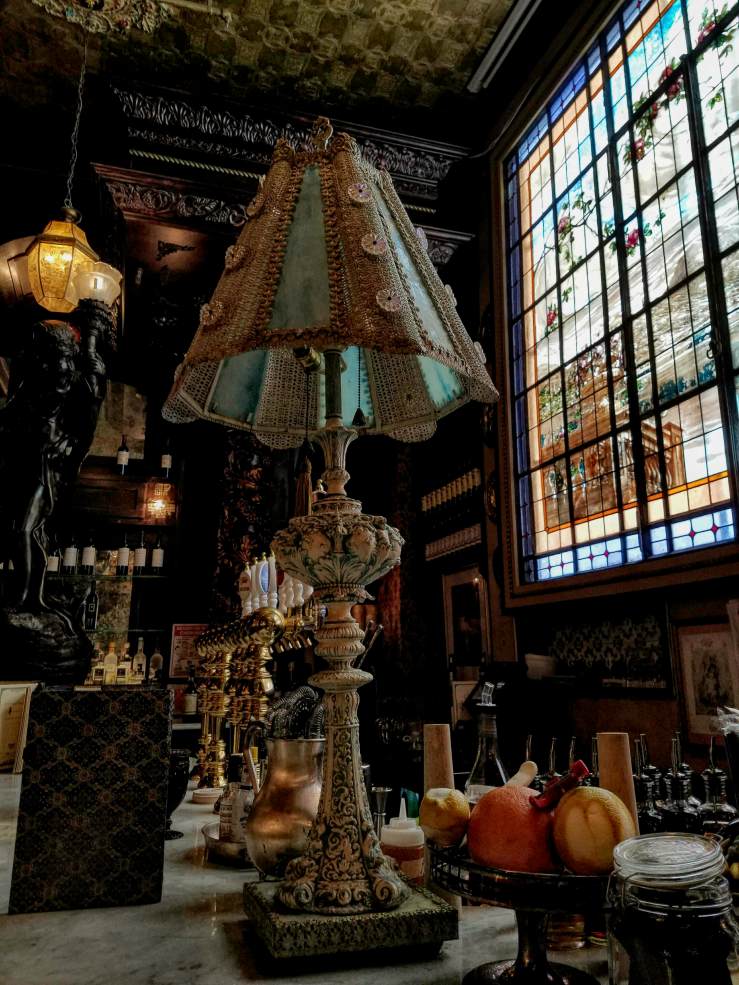 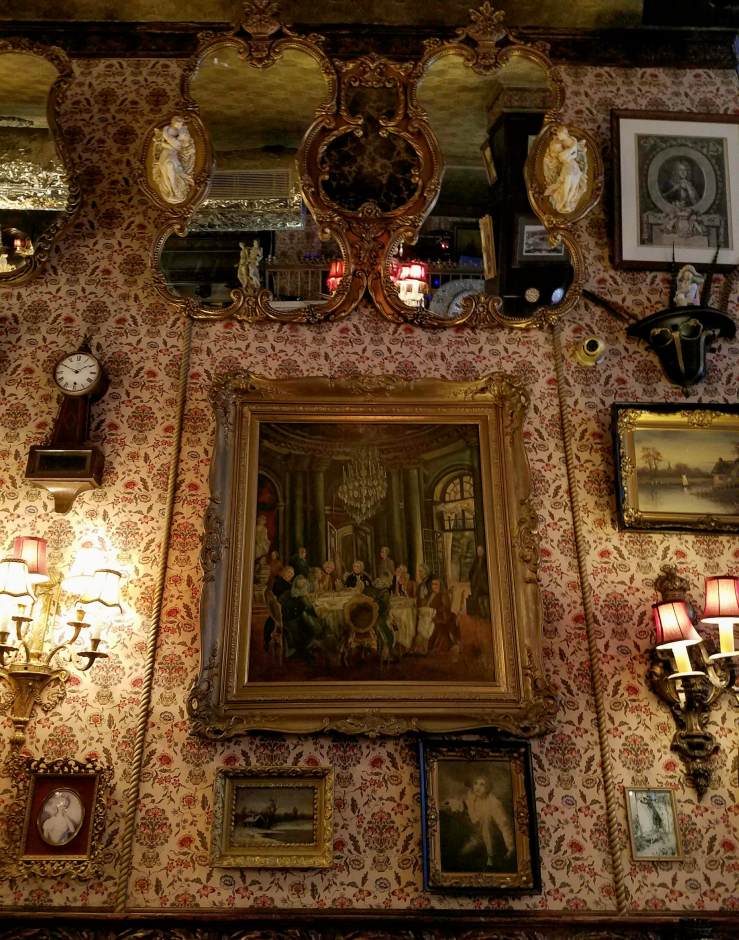 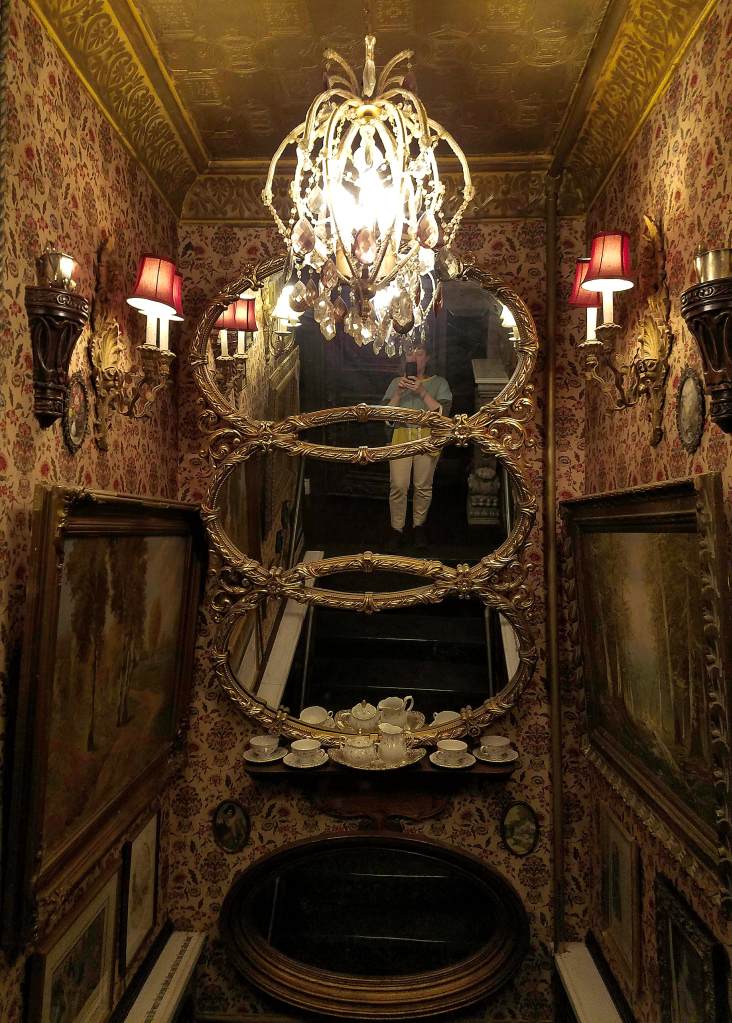 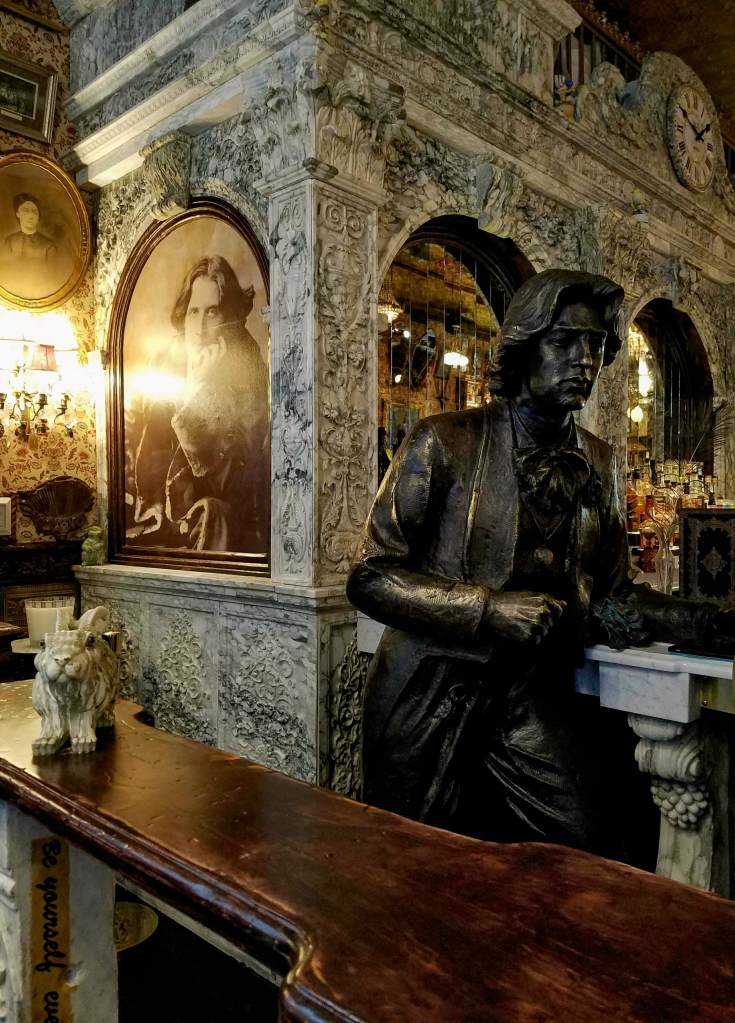 But I prefer Dr. Martens