I quite enjoy visiting an artist’s studio, there is something very charming and simultaneously voyeuristic about it. Going ”behind the scenes”, walking amidst art and creative clutter, the excitement of getting to see first-hand new works in progress, not to mention meeting the artists themselves.

If you time your trip to Marfa during the Chinati Weekend (which is actually a three-day event extending into Monday), you will find many artists opening their studios, which are also their homes, to the public. 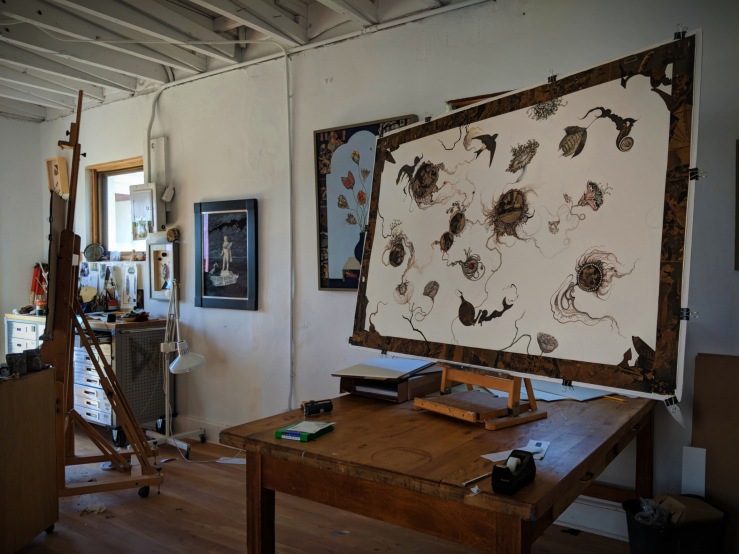 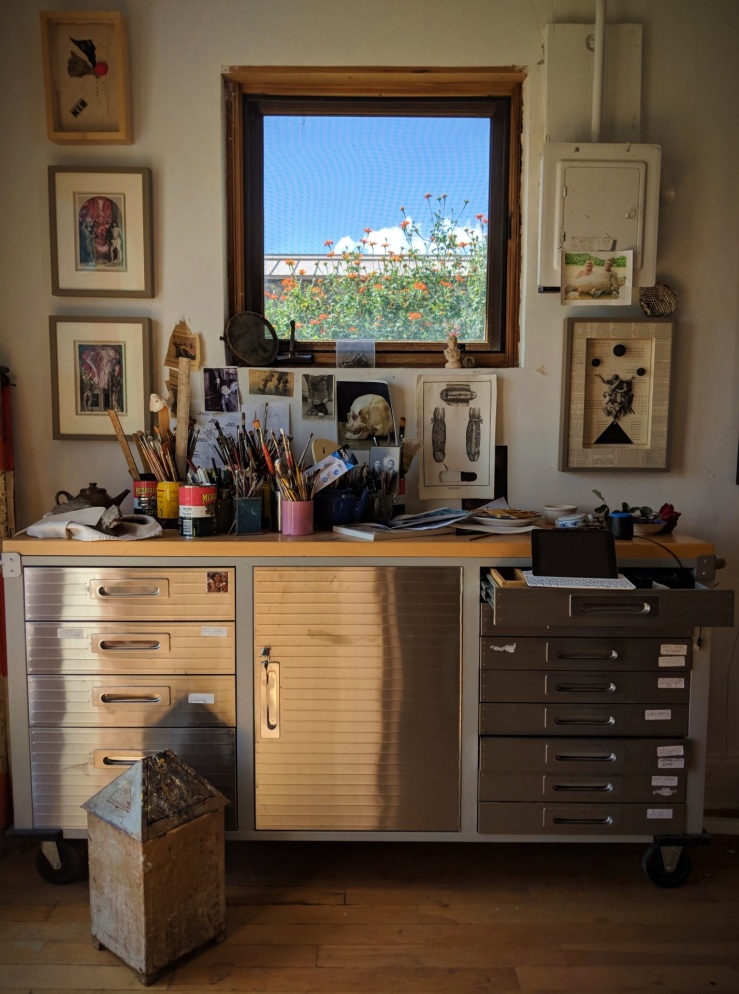 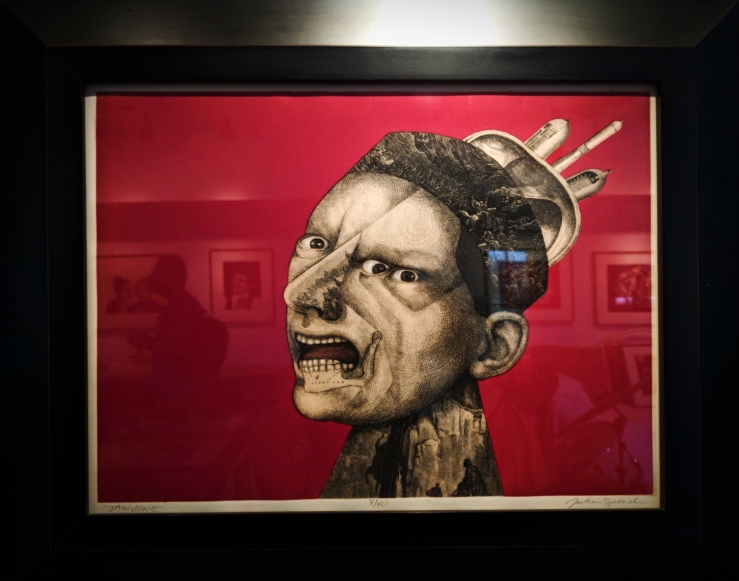 Thanks to Brooklyn Museum at its curators who had organised an extraordinary exhibition about the work and lifestyle of Georgia O’Keeffe. It was truly extraordinary because, refreshingly and for the first time ever, it focused on her wardrobe, showing some of her signature garments alongside her paintings and photographs. In doing so, the show was successful in capturing the spirit of the woman behind the artist, her steely determination to be in charge of her own life and work, the reinvention of herself as a style icon. I went into the exhibition an avid admirer of the work by one of the most significant artists of the twentieth century. I came out full of new images, knowledge and a better understanding of her intriguing personality. Coming back from Los Angeles, I couldn’t have asked for a smoother landing into the frenzy of New York City. 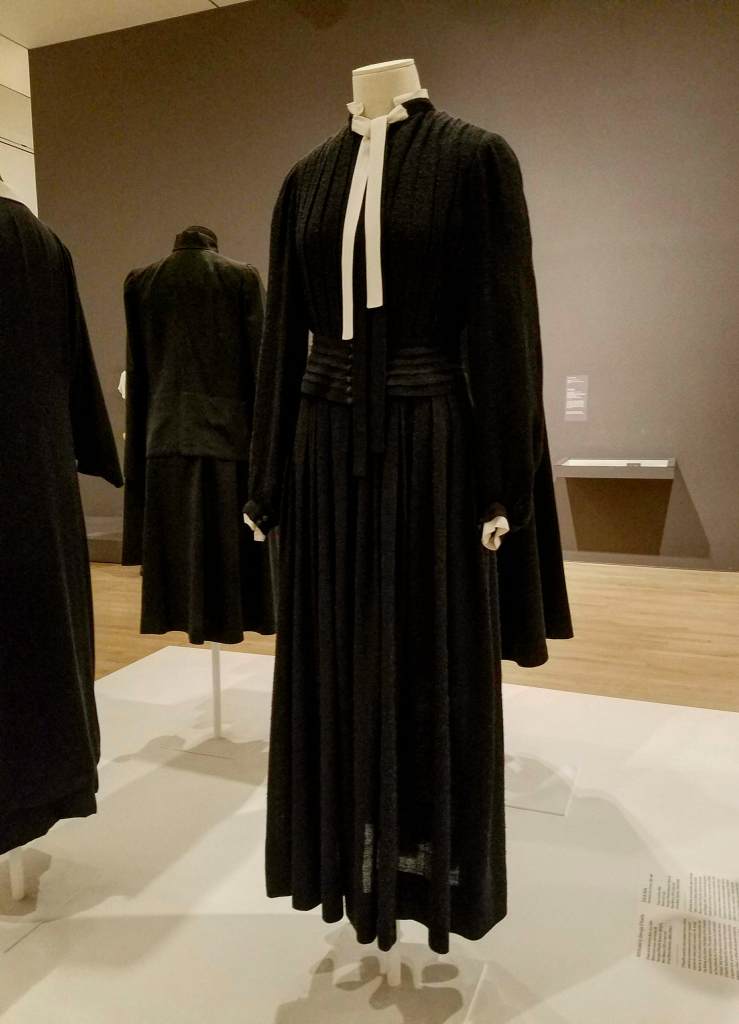 Black remained her favourite colour throughout O’Keeffe’s life. Her reason was described in one article in 1929: ”She wears black almost invariably – not, she says, because she prefers it, but because, if she started picking out colours for dresses, she would have no time for painting.” 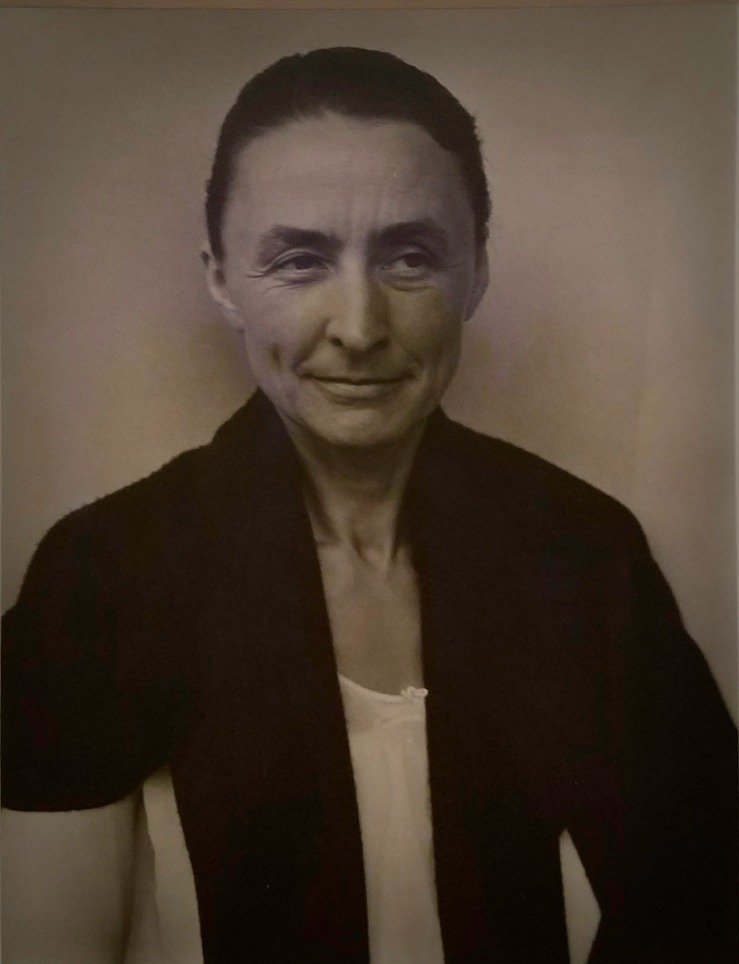 A modernist in dress as well as art, O’Keeffe liked to wear white blouses partially covered with a black sweater to create defined blocks of light and dark.

O’Keeffe considered her neck and head as integral shapes in arranging her dress. She frequently used the necklines of her blouses as visual framing devices for her long neck, and headdresses or her neatly wound hair to bring closure to her sartorial composition.

Just before moving to New Mexico permanently in 1949, O’Keeffe painted this farewell salute to New York, her home for thirty years. 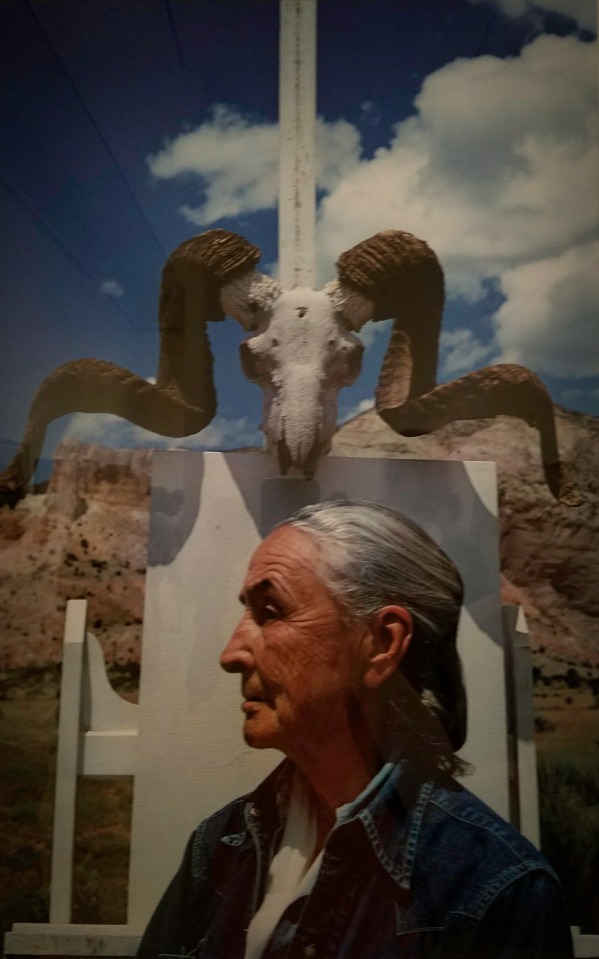 This apron was probably bought off-the-rack, but O’Keeffe added the lower section using her own scraps of denim. Though she had kitchen help much of the time, she was a good cook. She used fruits and vegetables from her own gardens and prepared food as she dressed, simply with few adornments.

O’Keeffe rejected the synthetic fibers that were popular during and after WWII, such as nylon, acrylic and polyester. When traveling in the 1950s and 1960s, she continued to seek out natural cottons and silks in either a single colour of sometimes with stripes, checks or plaids. She may have bought this heavyweight cotton-work jacket when she went to Franc for the first time, in 1953. She most likely designed the plaid Madras dress for herself. 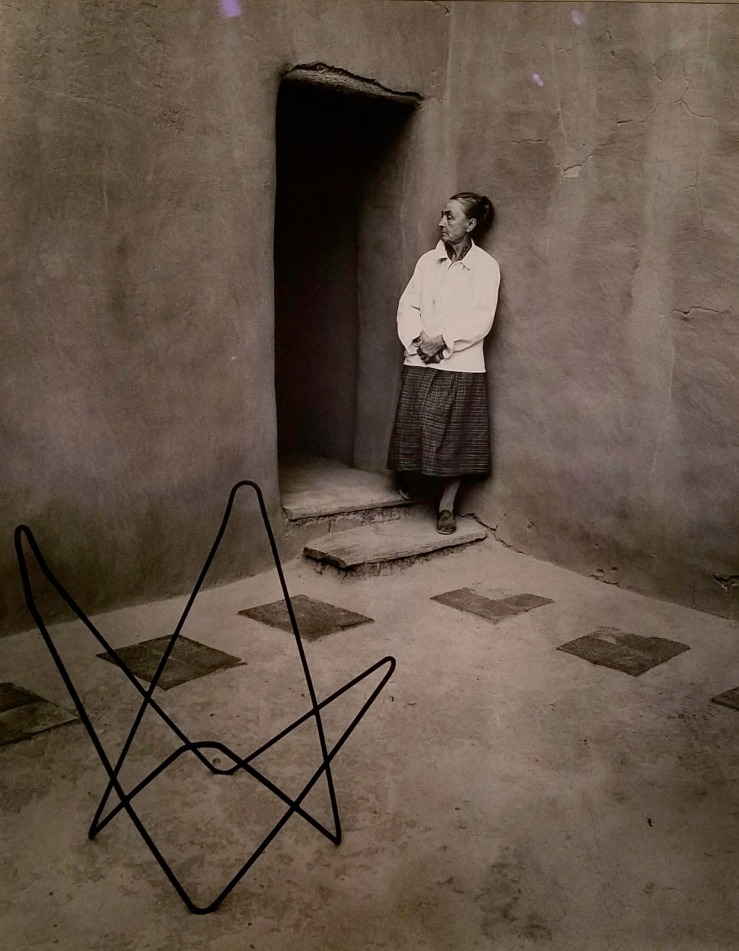 Customarily, O’Keeffe wore black and white when photographers came to visit, but in 1958, she made an exception for Don Worth. She wore her white French work jacket over the red plaid dress, we saw above.

Georgia O’Keeffe
In the Patio IX, ca. 1964
Oil on canvas mounted on panel

This was one of the first Pucci dresses to be sold in the American market, testifying to O’Keeffe’s interest in and awareness of contemporary fashion. 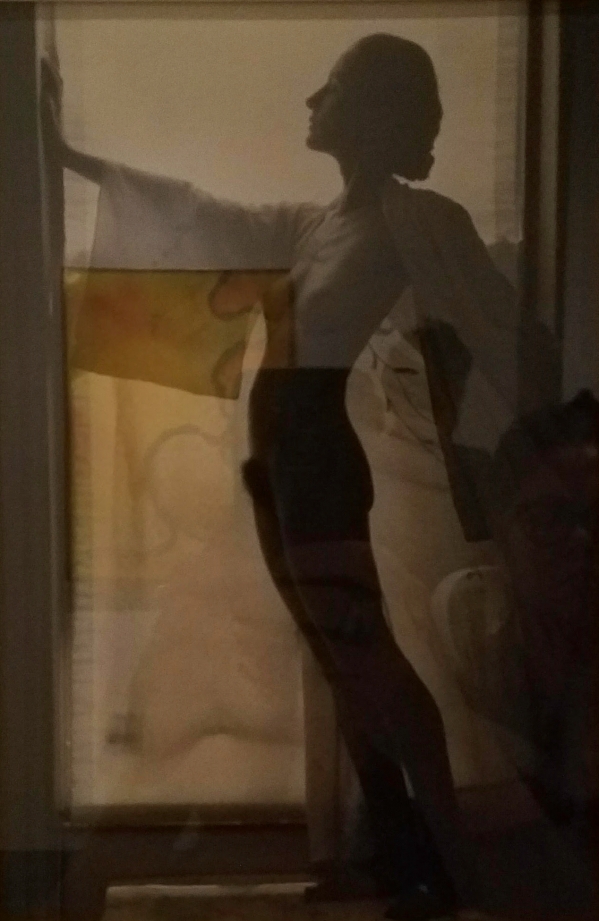 Paul Strand, a young photographer supported and mentored by Stieglitz, was the first to capture O’Keeffe sleepy-eyed and slightly disheveled, wearing a kimono. The fact that kimonos were sleep and bath wear for her gives this photography its frisson; her letters to Strand show that the two were briefly attracted to one another and may have had a short-lived dalliance. 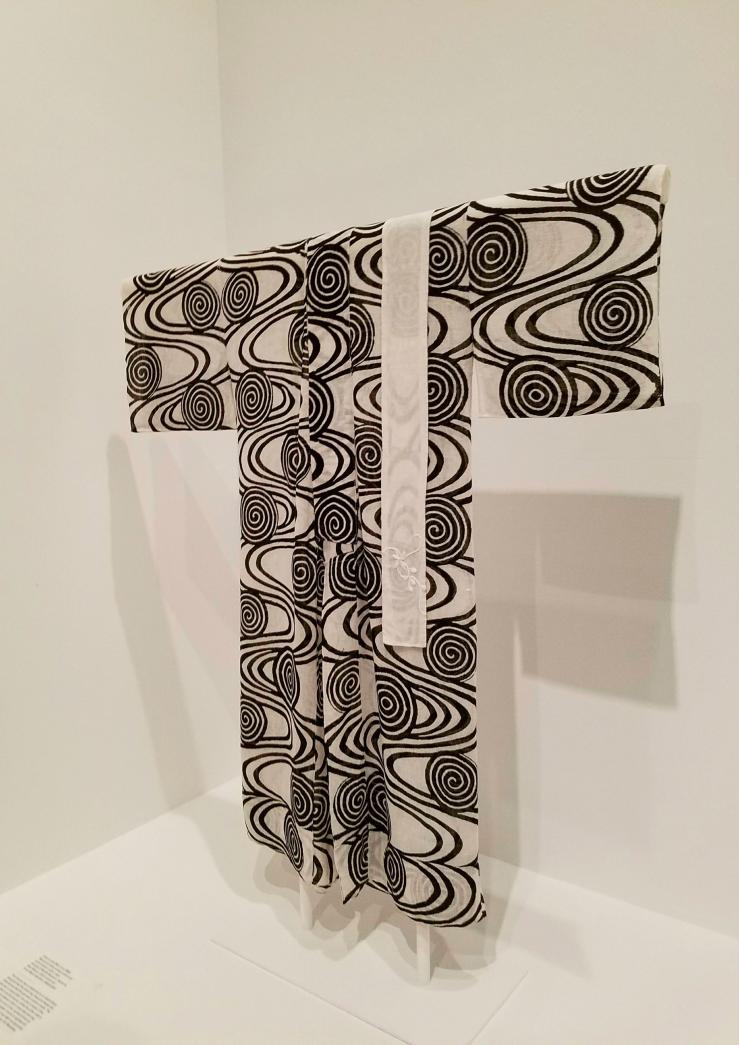 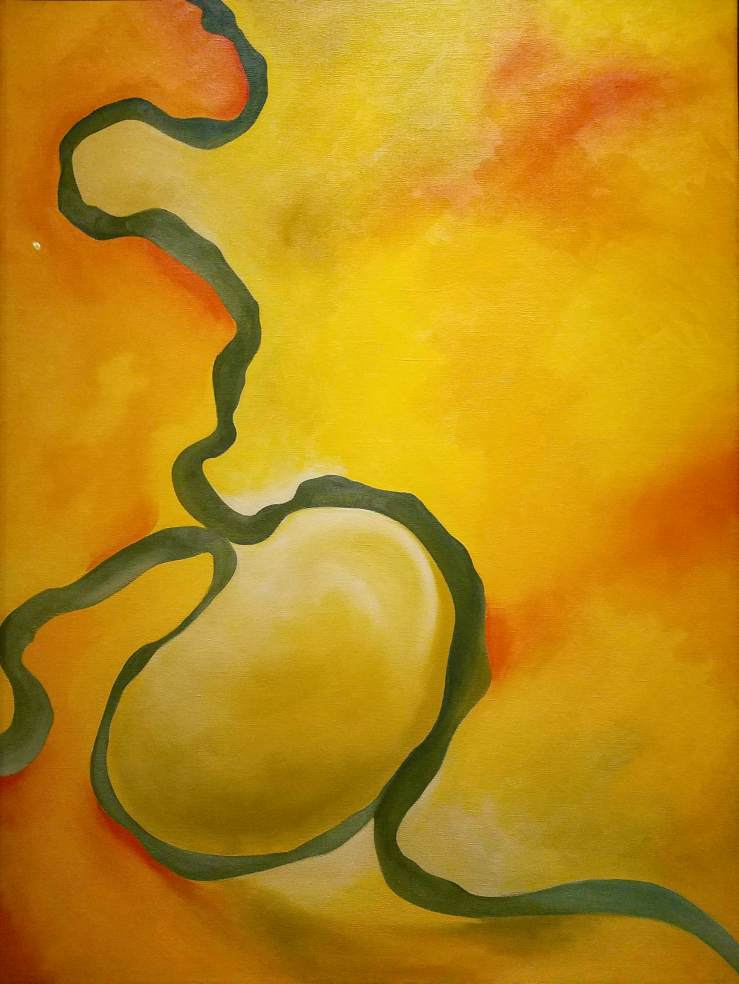 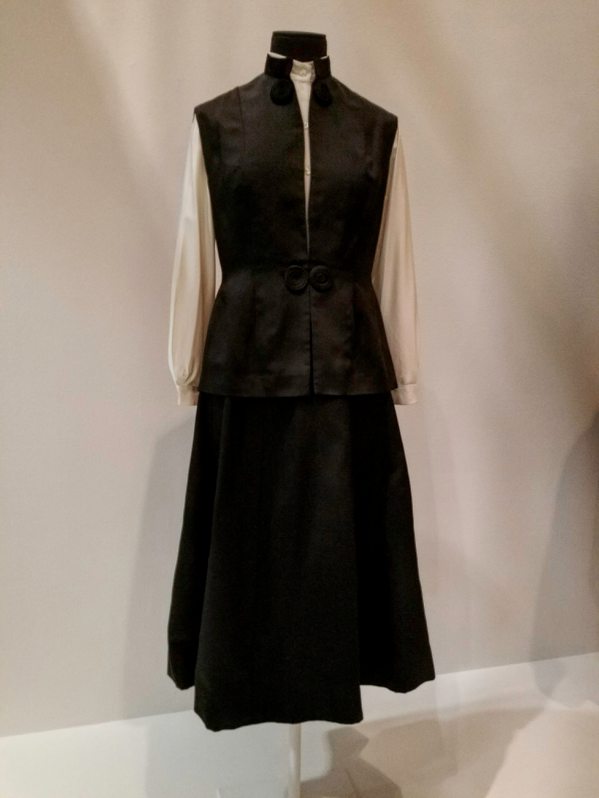 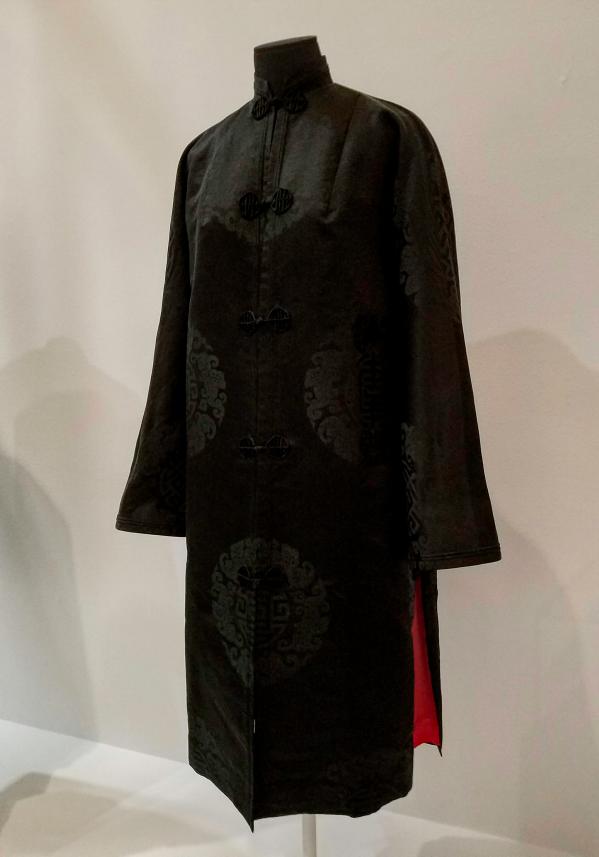 In 1981, O’Keeffe visited Ansel Adams in California for the last time. They were very dear friends and had known one another for over fifty years. He unfailingly got her to look directly at him and his camera for portraits that characteristically are straightforward and natural, without the mythos that attended photographs of her as a solitary and remote figure of the desert. 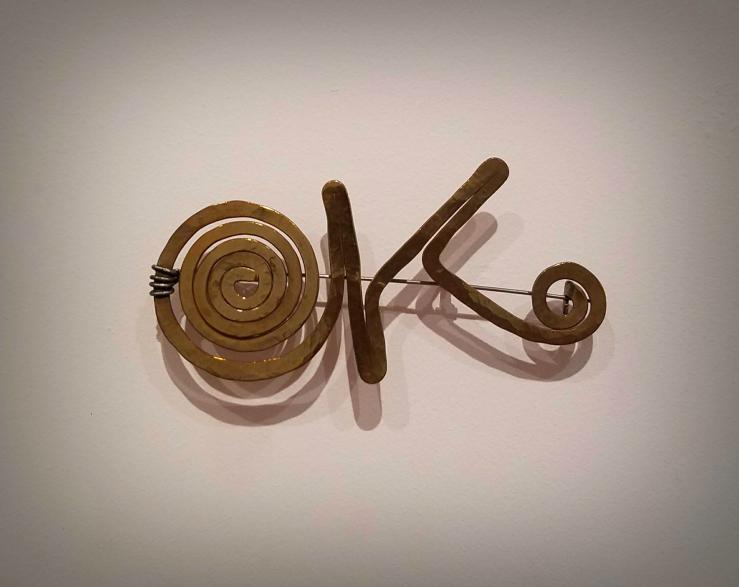 Sculptor Alexander Calder, who also made hand-wrought metal jewelry, created this brass pin for O’Keeffe. It first appears in a 1938 photograph and, from then on, O’Keeffe wore it often for photo shoots. When her hair turned grey, she found the pin’s copper colour less flattering and, on a trip to India in 1959, she found a craftsman to make her a silver version, which she wore for the rest of her life. She was known to boast that the copy cost her only five dollars.

Georgia O’Keeffe: Living Modern was running in Brooklyn Museum until July 23rd, 2017. I caught it one day before closing.