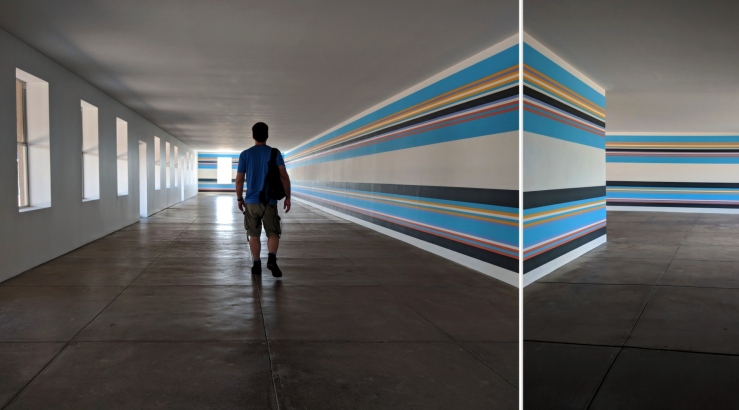 Riley’s first wall painting was made in response to a 1979 invitation from the Royal Liverpool Hospital to conceive a work for its walls. Riley devised a visual scheme featuring horizontal ribbons of color, running the lengths of the hospital corridors. The palette, like that of her paintings at the time, was inspired by a 1980 trip to the pyramids and tomb paintings of ancient Egypt. Of this color scheme Riley later wrote: “The Ancient Egyptians had a fixed palette. They used the same colors—turquoise, blue, red, yellow, green, black and white—for over 3,000 years….In each and every usage these colors appeared different but at the same time they united the appearance of the entire culture. Perhaps even more important, the precise shades of these colors had evolved under a brilliant North African light and consequently they seemed to embody the light and even reflect it back from the walls.”

Riley completed the design for the Royal Liverpool Hospital in 1983. In the years since, she has made many more wall paintings, including a work for two floors of St. Mary’s Hospital in London in 1987, with a third floor completed in 2014. In addition to these commissions, Riley has made wall drawings for numerous museum and gallery exhibitions and collections in the U.S., the U.K., and Europe.

Riley’s wall painting for Chinati will be the artist’s largest work to date and span six of the eight walls of the building. As referenced in the work’s title/description, Royal Liverpool University Hospital, 1983, as wall painting, Bolt of Colour, 2017, the mural revisits Riley’s Egyptian palette and establishes a continuity between the design for the Royal Liverpool Hospital and the new work for Chinati. It is inspired in part by similarities in size and spatial orientation in the sites of each project and affinities between the brilliant light and palette the artist witnessed in Egypt and the high desert landscape in which the Chinati Foundation is situated. [Source: Chinati Foundation]

The artwork was conceived specifically for the museum’s special exhibition building, encompassing it’s entire U-shaped enclosure. It was inaugurated in October 2017 and remained on view through 2019.

3 thoughts on “Relay with Riley”