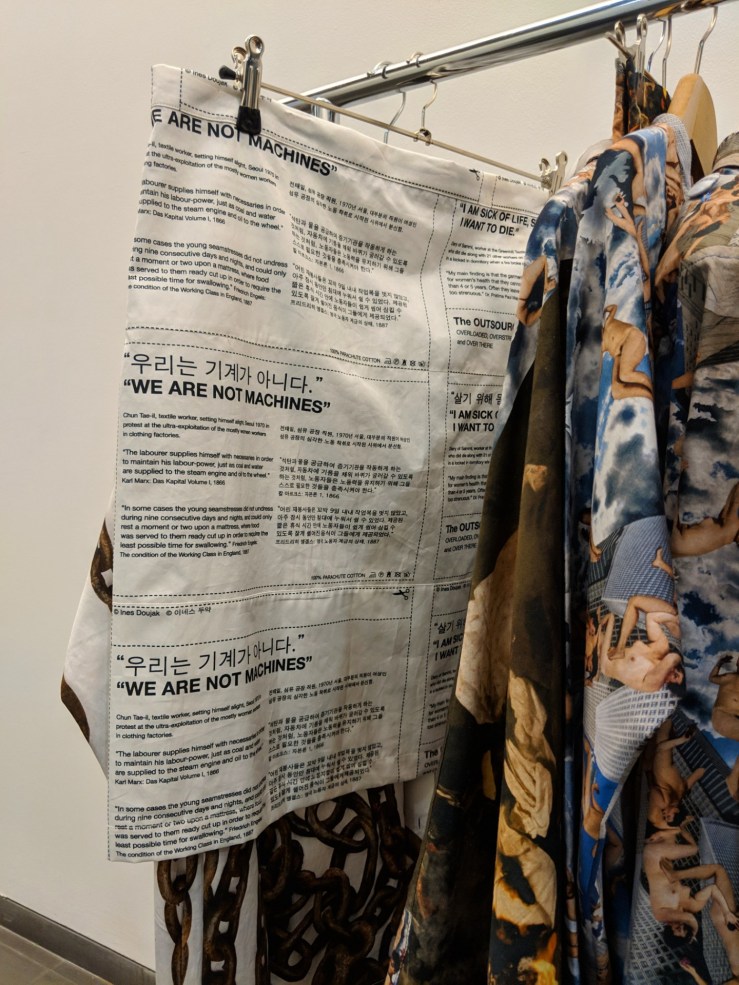 “WE ARE NOT MACHINES”

Chun Tae-il, textile worker, setting himself alight, Seoul 1970 in protest at the ultra-exploitation of the mostly women workers in clothing factories.

“The labourer supplies himself with necessaries in order to maintain his labour-power, just as coal and water are supplied to the steam engine and oil to the wheel.” Karl Marx: Das Kapital Volume I, 1866

“In some cases the young seamstresses did not undress during nine consecutive days and nights, and could only rest a moment or two upon a mattress, where food was served to them ready cut up in order to require the least possible time for swallowing.” Friedrich Engels: The condition of the Working Class in England, 1887

“I AM SICK OF LIFE, STRUGGLING FOR MY LIVLIHOOD.
I WANT TO DIE.”

Diary of Sammi, worker at the Greenhill Textile Company, Seoul, who did die along with 21 other workers on 25th March 1988 in a locked in dormitory when a fire broke out in the factory below.

“My main finding is that the garment industry is so bad for women’s health that they cannot continue for more than 4 or 5 years. Often they leave as invalids. It’s just too strenuous.” Dr. Pratima Paul Majumber, Bangladesh

“Because we have no holidays, night shift is too tiring and so our bodies become exhausted. Therefore we take ’Timing’ a medicine to keep us awake. Some of us have eaten too many and are addicted to these pills. If we fall asleep we are reprimanded, beaten and shaken.” A public statement by women workers at Pangrim textiles in Korea in 1978

“OVERLOADED, OVERSTRETCHED, OVERTIME…and OVER THERE”

24 workers were killed and many more injured at the Mirpur clothing factory, Dhaka, in a fire caused by sparks from an overloaded electricity circuit board on the 6th floor. They were doing enforced overtime and the emergency gates were locked.

“If you didn’t do overtime they would dismiss you, it didn’t matter if it was night or day.” Sophal, Cambodian clothing worker

Haute Couture 01 Fires is in progress.

From WOMEN.NOW, a group exhibition showcasing contemporary female artists based in Austria and the United States. On view from September 2018 to February 2019, the show united artists from different generations, commenting on women’s role in society and the arts.