You know you’re in the right place when -on touch down- you’re greeted with a display of some of the most iconic antique typewriters ever produced. 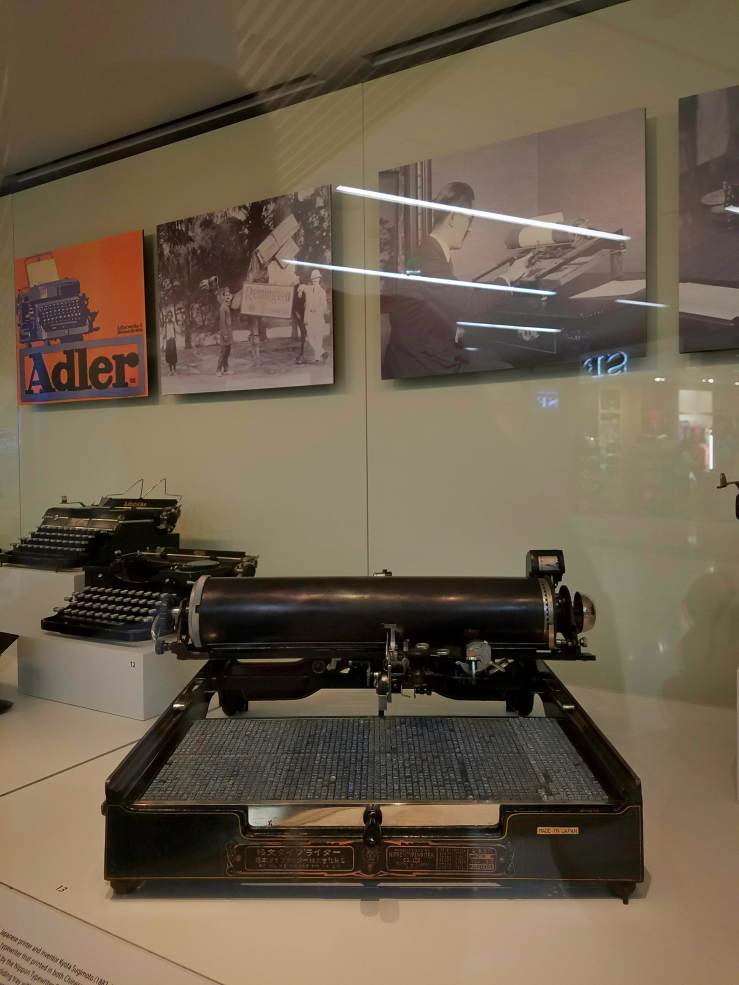 Chinese and Japanese script are logographic and utilize characters that represent elements of words or meanings. Chinese is one of the most ancient forms of active writing, with over 80.000 characters identified throughout different eras and regions of China. Modern Chinese is simplified. Around 3.500 characters are defined in the List of Frequently Used Characters in Chinese, with approximately 2.500 in Common-use Character lists published by the Chinese government.

In 1915, Japanese printer and inventor Kyota Sugimoto (1882-1972) patented a typewriter that printed in both Chinese and Japanese. Manufactured by the Nippon Typewriter Company, the machine featured a large, sliding tray to room for 2.450 individual type-slugs.

Typing in Chinese or Japanese on a flatbed typewriter is a complex procedure. Operators of these machines must familiarize themselves with the location of more than 2.000 type-slugs, and most early typists averaged twenty to thirty characters per minute. Typing speed substantially increased with the arrangement of type-beds by operators to suit their individual needs. In the early 1950s, the New Typing Method introduced ”radiating compound” organization to Chinese typists. Depending on subject matter, associated characters were arranged around central, primary characters in radiating patterns. Typists were responsible for their own layouts, and organization differed dramatically. For instance, a layout for a government office would be quite different than for a factory, with names of officials substituted for company names and technical terms.

Throughout the 1950s, most Chinese language typewriters were manufactured in Japan. The Chinese government restructured typewriter production under the new communist regime and in 1964, the Shanghai Chinese Typewriter Manufacturers Association introduced a flatbed typewriter. Based on the Japanese typewriter produced by Nippon Typewriter Co. in Tokyo, the revitalized machine was branded the Double Pigeon DHY and made by Shanghai Calculator & Typewriter. Available with either ribbon-or roller-inking mechanisms, the DHY was the iconic typewriting machine of the People’s Republic of China and was manufactured until 1992.

The Valentine is perhaps the most iconic Olivetti typewriter, envisioned by designer Ettore Sottsass (1917-2007) as an inexpensive and simple-yet-stylish portable.

Modern typewriters use a shift-key mechanism to select upper- and lower-case characters. Many models introduced during early typewriter production utilized a double-keyboard arrangement, with two banks of keys organized by upper and lower cases. Initially, makers of double-keyboard machines promoted their potential speed and efficiency. The Smith Premier was the best-selling typewriter of this group and advertised ”a key for every character”. Like the Sholes & Glidden Type Writer and early Remington models, the Smith Premier was an upstroke machine and did not print within the user’s view – its carriage had to be lifted to reveal the paper and printed text. 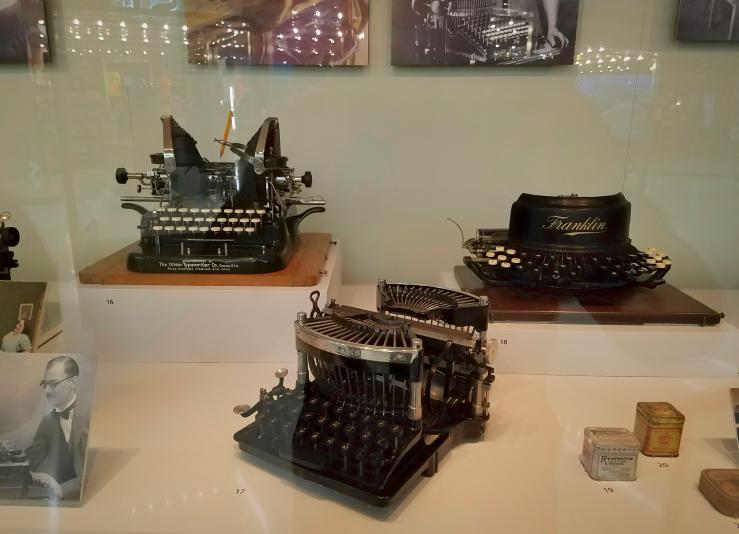 Our amazing trip to the West Coast had just began in the best way possible – in San Francisco International Airport.

There is a fine line between extravagance and gaudiness.

There can be too much of a good thing. Although Liberace would disagree.

A shop window right out of Liberace’s living room in Manhattan Midtown, East.

The world around through my camera's lens

A picture tells a thousand stories!

My photographic adventures on the other side of the world

Stories and photos from Scotland

Showing the beauty of this world through the people, places and culture

Savouring life intensely every hundredth of a second by capturing scenes from across Cumbria - the Lake District National Park. A pictorial guide to the lakes by a dilettante photographer.

The Depth of Now

Now, Here and Somewhere else

The blog of a Graphic Design BA student. I have completed an Art foundation and (as hopefully you will be able to tell) have strong interests in both Science and Art.

Everything You Want To Read